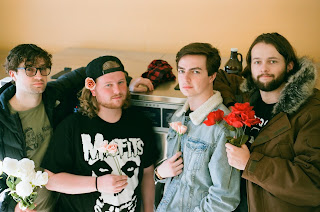 oh!no?ok. is comprised of high school friends Ryan Osborn, Cole Miller, Jackson Ludlow, and local guitarist Nick Storey. The band is a year old, and has been working closely with locally-renowned producer Nate Pyfer (The Moth & the Flame, Kaskade, Sego).

Lead vocalist Ryan and Nate laid the groundwork for the band’s music, though each member brings his unique flair, making the process a cohesive collaboration. They play the kind of music you’d hear blasting forth from a suburban garage in the height of the alt-rock boom of the 1990s but they update this scruffy aesthetic with sleek but-not-too-polished production and a dose of raw skate punk. 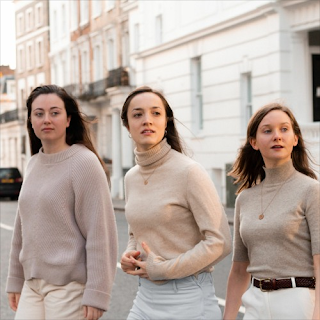 Café Spice - She Loves And Leaves.

She Loves and Leaves sees Café Spice release their first track in their full “girl band” outfit, and marks a turning point in their sound. Having crafted a reputation amongst the country’s key folk tastemakers, the trio hailing from England, Scotland and Ireland now push the boat out into the mellow waters of indie-pop.

The track opens with a serene a cappella rendition of the Chorus, fast becoming a trademark of the group. Their alluring and interweaving melodies begin to colour a blank musical canvas before a delicate guitar rises from the harmonic haze. However, soon the band arrive in new sonic territory, as a series of effortless brush strokes introduce new drummer Sophie Wozencraft, elevating a beautiful acoustic with an elegant indie skip. The added percussion skims like a pebble, rippling the tranquil waters of what has gone before.

Existing fans should not be surprised by the turn, with an element of unpredictability always finding a way into Café Spice’s repertoire in one way or another. However, this particular introduction is a clear statement of intent from a band determined to turn more heads onto their well-seasoned sound.

The sonic is equalled by the trio’s reflective and contemplative lyricism. In the words of Café Spice: “How can you understand what you want when you're twenty and so ready to love the world and everyone in it, so ready to lose yourself in somebody else? If you've ever been confused about love, nestle down and plug in your headphones - this song is for you.”

She Loves And Leaves demonstratesthepotpourri of musical influences that pervade throughout the Café Spice songbook. At times they are reminiscent of The Mama’s & The Papa’s; on other occasions more attuned to indie-folk contemporaries HAIM or The Staves. Either way, She Loves And Leaves is the latest testament to the collaborative songwriting that makes the music of Café Spice so unique. 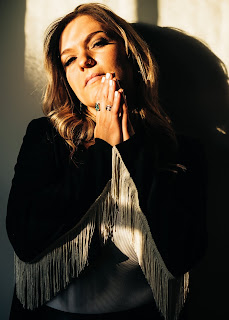 Calgary soul-roots revivalist Jess Knights returns with the simmering “Baby, Won’t You Stay,” off her upcoming debut LP, Best Kind of Light, set for release on a new postponed date of June 19.

Filtered through transcendent hip-swaying instrumentation from some of Toronto's best songsmiths and sidemen, including R. Grunwald, Dean Drouillard, Mark McIntyre and award-winning producer Joshua Van Tassel, the track is a playful plea to hang back after the sun’s come up. Brimming with soulful throwback energy and Knights’ coy vocal conviction, “Baby, Won’t You Stay” muses on love in the moment.

“This song is a nod to the music I grew up with and love the most with its Dap-Kings groove,” said Knights. “It's a happy, upbeat and soulful song that gets you moving, and I think the world could use a happy song right now. It’s a weird time to be releasing music, but my hope is that this ditty brings a little joy to you all. Brighter days are ahead and for now we've got to keep our spirits up with feel-good music.”

Best Kind of Light brings into focus the moody, dimly-lit spectrum of Knights’ classically-trained voice, which has drawn comparisons to U.K. luminaries Amy Winehouse and Eliza Doolittle. Able to traverse sultry ballads and raise-the-roof-off-the-church soul with ease, Knights is a dynamo performer that's bound to leave an impression. 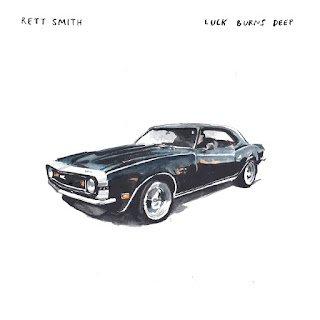 Texas born singer/songwriter/guitarist Rett Smith shares the new single,  “Luck Burns Deep”. The  Bluesy rock and roll anthem  comes from his new album Giving Up On Quitting due for release on May 22nd via Imperial/Republic. The track follows “Hardship Highways” and the debut single from the project “Better Day,” which was a featured 'Best New Music’ pick by American Songwriter.

As one of the more stripped down tracks on the album, “Luck Burns Deep” serves to showcase Smith's evolution as a songwriter, yet he still manages to work in plenty of the guitar shredding many fans know him for. Between the guitar chops and old soul lyricism, Rett Smith’s work gives the impression that he has been a musician his whole life. In fact, Smith only discovered his talent for playing music after walking away from a successful career as an internationally ranked downhill skier. Though Smith no longer competes as a professional athlete, that same intense drive and focus that allowed him to flourish as a successful athlete is what pushes him as a musician.

The previously released “Hardship Highways” is one of the best examples on the album of Smith turning the bumpy road of life into a sonically rich song. The track is a tale of a life lived on the edge as Smith recounts bad choices and mistakes fueled by drugs and alcohol. He isn’t looking for redemption or pity; he is simply sharing his life knowing some listeners might relate to the journey. Even with the undeniably morose tone of his songs, Smith insists that making music is something that fills him with gratitude and joy.  He says, “I feel an undying need to create, to translate my most extreme feelings and emotions through song...” Smith’s  love for writing songs  while also using it as a therapeutic outlet is what keeps pushing him forward. “I want things to get better and I don't want to live in this space of just being miserable.” Dealing with these issues and fighting to get better is a recurring theme across the songs on Giving Up On Quitting.

Compared to previous albums like his 2015 debut Tularosa, 2016’s Oscuro and his heavier 2017 side project SAENTS, with the self-produced Giving Up On Quitting Smith is carefully layering instrumentation to create his own distinctly Western sound inspired by his roots in Texas and New Mexico. Smith says these songs, “are about being on the road and escapism. The realization that you’re still there, no matter how far you run.”