“A tip of the hat to some of our favourite crossover anthems,” according to Stragglers’ frontman Lee Martin, ‘Forever & A Day’ is a song of epic intent, one that emerges from waves of feedback to deliver, via an enormous harmonised chorus, a yearning for simpler days – a sentiment we can all relate to during this disorienting corona-summer of 2020. A meld of robust garage rock and Nineties baggy euphoria, the song addresses the need to “accept the beauty of being aware that some things are bigger than me or you”, says Lee. The video, all wide-open seascapes and big skies, adds to the song’s expansive atmosphere as the band heed the lyrical call: “Meet me on the Way to the Sea”.

About ‘Last Call’ - Running the gamut of rock’s dynamic range, ‘Last Call’ journeys thrillingly from the industrialism of its opening bars via a satisfyingly slow-burn crescendo to its intense uber-grunge coda. The ‘Last Call’ in question is in many ways a cry for unity and justice – in this case expressed by making sure you do the honours when it’s your turn at the bar! Only Blue Stragglers could convey such a message with the intensity of ‘Last Call’.

About the ‘Blue Stragglers’ EP - Comprising five heavyweight alt-rock gems that lay equal claim for A-side status, Blue Stragglers’ debut EP captures the Sussex trio at their muscular, melodic finest. Recorded and mixed by engineer and producer David Holmes in the belly of Lightship 95 at Soup Studios – a houseboat turned recording studio docked on the Thames in East London – the EP sessions were almost over before they had even begun. Recording took place during a ferocious winter storm, which turned the loading of equipment across the Lightship’s ice-covered bridge into a precarious ordeal. Thankfully, the dreaded cry of “man overboard” was never heard and Blue Stragglers laid down five songs to serve as rallying calls of rock’n’roll defiance during a summer that’s been thin on such life-affirming delights. The mastering of the EP was shared between Bill Skibbe of Jack White’s Third Man Mastering in Detroit and Oli Morgan of Fluid in London.

Not many bands can claim to have built and then run their own non-profit rehearsal studio but then Blue Stragglers are not like many bands. Having grown up in the town of Horsham – nestled between London and Brighton – Lee Martin (vocals, guitar), Ali Waite (bass) and Andy Head (drums) bonded via a love of bands such as The Raconteurs, PJ Harvey, Supergrass, Demob Happy, Beck, Grandaddy and Jane's Addiction. Skilled players themselves, the trio originally formed the backbone of the much-loved Sussex act Tied to the Mast. But when they struck out on their own to form Blue Stragglers, they were lacking somewhere to hone their craft. And so began the tough but ultimately fruitful challenge of converting an empty space next to a South Downs chalk pit into somewhere they – and other Sussex bands – could practice 24/7.

This DIY dedication to their art is evidenced by the intuition that each member has for the others’ playing, as seen and heard in the supremely powerful live showcases that have secured Blue Stragglers a cult following across England’s southeast, from Brighton via Tunbridge Wells to Horsham and Hastings, alongside some intimate London gigs that first drew the attention of Lost In The Manor records.

Exuding that impenetrable, gang-like identity that’s the preserve of only the best trios, Blue Stragglers been picked up by BBC radio, stolen the show at a number of grassroots festivals and now, thanks to their debut EP release on Lost In The Manor, will be spreading that buzz much, much further afield. A programme of showcase gigs will be announced after the lockdown but in the meantime, you won’t find a better means of banishing the lockdown blues than a healthy blast of Blue Stragglers. 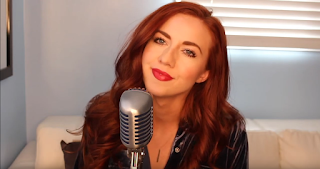 Nashville’s newest darling, Caitlin Quisenberry just released her the music video to her latest single “Imogene” after massive support on the single from Spotify Editorial with “New Music Nashville” and “Nashville Stripped.” The production and vocals of “Imogene” are as unique as the name. It blends two world together as the innocence of the mandolin sets the stage for Caitlin’s euphonious vocals, only then to be paired with the entrancing tribal drum beats found in the chorus, further pulling its listeners into the whimsical storyline.

“’Imogene’ is a journey into our subconscious, taking us to a place we have all been – being in awe or infatuated with what someone else has. It runs in the same vein as ‘Girl Crush’ by Little Big Town, where the elements of fantasizing, crushing jealously and desire, are all present. Another example is the classic, ‘Jolene’ by Dolly Parton portraying envy of another woman’s attributes that are so amazing she begs the beauty not to take her man. What I appreciate most about ‘Imogene’ is that it cleverly delivers those feelings in an upbeat, feel-good way, while sparking emotions of an old crush or the excitement of the uncharted territory of a new relationship.” - Caitlin Quisenberry

The daydream-like narrative of “Imogene” is being perfectly paired with an animated music video created by one of Hollywood’s most talented cartoonists, Tom Schneiders. To find out more about Tom, visit his website: burdstv.com and follow @burds.tv on Instagram. Caitlin sought out his style to give “Imogene” the idiosyncratic nature it deserves. The video was purposely planned to follow the release of the song to give its listeners time to reflect and imagine, before viewing the artist’s interpretations.

Caitlin may be new to Nashville’s scene, but she is no stranger to the public eye. Her time spent in Hollywood landed her leading roles in national commercials along with her most notable role in the ABC TV sitcom, “Blackish”. Although she loved acting, singing was always her true passion. So after recording with Grammy-winning producer Robert Cutarella at age 14, nabbing a Golden Ticket on American Idol at 15, winning Miss Colorado’s Outstanding Teen after singing to a sold-out audience at Denver’s Ellie Caulkins Opera House, she decided to dive even deeper into music and studied classical vocal performance at Pepperdine University.

Beyond this, Caitlin also studied abroad in Lausanne, Switzerland with renowned opera singer Karine Mkrtchyan. Caitlin believes her classical background is what has given her an advantage in the sea of incredibly talented singers. This, paired with the performance opportunities, is what led her into country music. Her Pepperdine vocal coach choose her to sing lead vocals in the Harbor Unplugged bluegrass concert because of the natural country twang she had in her voice. As Caitlin sang with a Nashville band, she knew that country was the direction she wanted to take her music! 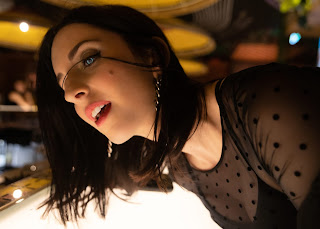 Nadia Vaeh's powerful new track "Anxiety," is a reflection on her personal mental health struggles and how she copes with the highs and lows of anxiety.  She is donating a portion of the proceeds to MusiCares, an organization focused on providing critical assistance to people in the music industry, and resources that affect the music community’s health and welfare.

Nadia Vaeh brings thought-provoking and inspiring storytelling in her dark and raw new single. Vaeh’s sincere lyrics of her own experiences, combined with the moody and dark undertone of the single, brings a realistic and relatable perspective on mental health. As an advocate, she hopes her music can inspire people to embrace the conversation of mental health and be a reminder that they are not alone.

Atlanta native and IMA "Vox Pop" winner, Nadia Vaeh, found her way into artistry through modeling and an unexpected stint with a local Atlanta circus. She started singing in their productions, but this was not the beginning of her artistic roots.

Nadia’s love of music and singing began at the age of two and was nurtured by her parents who placed her into a traveling youth choir when she was in middle school. She created small productions with the neighborhood kids and her sisters while growing up. Her mother was a poet who passed on her love of words, which later fueled Nadia’s talent as a lyricist. Nadia’s life took an unexpected turn at the age of 17 when she lost her mother to suicide.

She dismantled her high-school band and strayed from songwriting and singing for years, other than the occasional karaoke. After this tragic loss, she went down a path of self-sabotage and destruction and used relationships and partying to ignore her pain. When she finally decided to begin again with artistry, she was a shell of a person and looking to anyone and anything for answers to deal with her heartbreak. “I made a lot of missteps when I first began my career and had to learn a lot of things the hard way.”

With her endless resilience, she has grown into a performer, has had her music recently played on international radio, and is looking forward to sharing more of her music here in the U.S. and around the world.