This year we have enjoyed some fabulous Welsh bands and artists with Melin Melyn being no exception as their new single 'Rebecca' ably demonstrates. It's an alt rock song of sorts however take that as a centre point from which the band expand, the vocals are positively surreal, the lyrics a tad disturbing, the underlying humour is wonderful. ===== Chris Lewington has a new album out entitled 'Riverside' from which we have two tracks namely 'Spread Your Wings' and 'Armistice Day'. I chose these two songs because they give a good feel for the scope of the album, with the first track we have a passionate acoustic song, the second has a lush string arrangement behind some stirring vocals, both reflect well on the album as a whole which in my opinion is quite stunning. 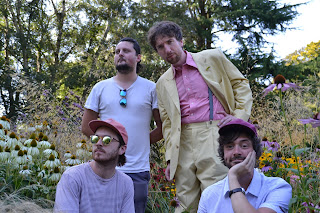 Welsh band Melin Melyn announce themselves to the world with their explosive new single ‘Rebecca’. Starting off with a psychedelic country twang that that draws comparisons to compatriots Gorky’s Zygotic Mynci, the song quickly descends into a frantic audio barrage of explosive guitars, turbulent sax and wild vocals that wouldn’t be amiss from a Squid or Home Counties track.

“I've always been fascinated by the tales of the Rebecca Riots,” says lead singer Gruff, whilst discussing the tracks’ lyrical meaning. “It was when local Welsh farmers in the 1800s took to smashing up the toll gates put up by rich landowners, whilst being dressed in women's clothes screaming the name Rebecca. That incredulity and rage still exists today, rising day by day due to the rich feeding off the poor...perhaps I should get my skirt....”

Melin Melyn are the next in a golden generation of exciting, left-of-centre Cymru bands soon to take the rest of the UK by storm. Oozing seventies typography, sun-drenched melody, and surf jangles, this Welsh four-piece are not so much round pegs in square holes as they are determined to throw the whole box out, blurring the line between folk, rock, pop and psychedelia. Singing in both languages, (as seen on debut single Mwydryn), their weird tales of colourful characters and magical worlds aren’t in fact that far removed from today’s off-kilter reality. It’s eccentricity at its finest & paradoxically most accessible, and that has already seen them played on BBC Radio 6 Music, BBC Radio Wales & BBC Radio Cymru.

Having been booked to play Green Man & End Of The Road Festival before the Covid-19 pandemic, the band are as much as a tour de force in the live setting as they are on record, and will hopefully soon be performing live again. ‘Rebecca’ marks the beginning of a band. 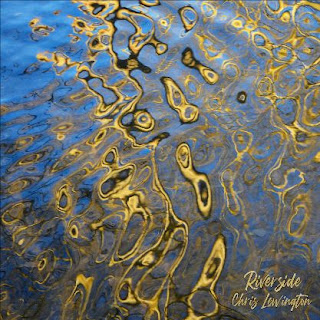 Riverside is the second album by Chris as a solo artist. Drawing inspiration from artists such as James Taylor, George Harrison, Scott Walker and Paul Simon to name but a few, Chris has produced a classic sounding album but with a contemporary twist.

Themes of songs are varied. There’s relationship songs – love or just friendship . “Firelights” is about Lizzie Siddal and the Pre Raphaelites. “Armistice day” is a Rupert Brooks poem set to music. “Taj Mahal” about Shah Jahan. “After the Sun” maybe is/isn’t a post covid song. The first half  of the album is quite English. The second half takes on a bit more Americana or country tinge in places. The last track “Spread Your wings” is loosely about Gene Clark the Byrd who didn’t like flying.

Chris is no stranger to the music industry having supported Stiff Little Fingers, Captain Sensible, The Shaman, Jah Wobble and The Breeders to name but a few in his music career and with the Bicycle Thieves in the late 80’s gained Radio 1 airplay with Mike Read and Tommy Vance.