Departure Lounge new song 'Mercury In Retrograde' is a melodic affair, the musicianship is glorious and vies for attention with the softly delivered vocals, the only challenge is trying to pin it into any specific genre. ===== Glaswegian band The Ninth Wave new track 'Everything Will Be Fine' is now out. The bands mixture of indie pop and rock is dynamic and powerful, the vocals and harmonies add emotion on what is a hook filled piece. ===== It's been a while since we last featured The School Book Depository they have been consistently impressive and the new song 'Sunny Disposition' sees their gorgeous style of Americana once again impact wonderfully. 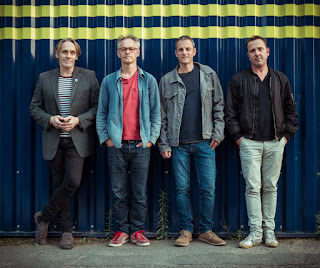 "Mercury In Retrograde refers to the phenomenon whereby the planet Mercury appears, for a period of time, to be travelling backwards in the sky in relation to Earth. This happens a few times a year and is, according to astrological lore, responsible for all kinds of chaos, confusion and frustration in our lives here on the blue planet.

So that’s where the song title comes from and the lyrics document a period in a relationship when the protagonist is perhaps feeling the effects of this supposedly illusory occurrence.

Mercury in Retrograde is the only complete song we already had when Departure Lounge reunited recently to make the Transmeridian album. It had been a live staple in our first operative period around the turn of the century, but slipped through the net when it came to recording. At the reunion gigs, several people said it had always been their favourite and it still sounded fresh.

Musically, Mercury In Retrograde is a bit of an oddball, with a slow-picked acoustic guitar reminiscent of ‘Here, There And Everywhere’ offset by a Roni Size-esque drum ‘n bass groove played with brushes and double bass, accompanied by a slightly wonky Casio CZ101 nursery rhyme synth line. I’m making it sound like a car crash, but somehow it works. The way these apparently disparate elements fit together makes for a good analogy of how our band works and its celebratory chorus has proved to be a stubborn earworm." 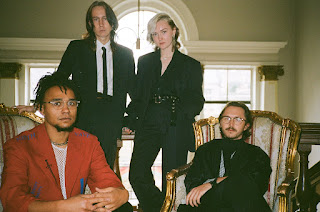 "Everything Will Be Fine" is a portent mantra to shout from the rooftops amidst some of the most confusing and unsettling times our generation has faced. Brimming with prudent positivity, the track is a product of the last 6 months the band have spent together in Glasgow.

It's immediately apparent that The Ninth Wave are moving into exciting new territory with "Everything Will Be Fine". An invigorating dose of dark emotive pop; there's a new air of confidence in the music the band are making. Not only is that confidence evident in their songwriting and production (they're currently self-producing much of their new material) – but also in the conviction of their lyrics.

"It’s a song about twisted optimism, self-reassurance and hope," singer Haydn Park-Patterson explains. "The overall message of the song seems fitting for the world that we’ve found ourselves in now. Like many of our songs, it has existed in various different incarnations. I wrote the first version of it in the summer of last year and it was originally intended to be a song for someone else’s comfort and reassurance. It was shelved until earlier this year, when I stripped it down and kept only the name of the song. It then became the twisted optimistic song that it is now after it was brought in, stripped down and rebuilt by us in the studio. It’s the happiest sounding song we’ve recorded."

The new single arrives alongside an almost 10-minute long extended 'Driving Version' of the track, which the band says: "was intended to be listened to when you’re driving alone in your car, imagining yourself in that sad but sweet scene in a movie when you’re the heartbroken but hopeful character driving off into the sunset to find yourself".

The band's new material promises to be more upfront and honest than ever before. Celebrating honesty and real life, The Ninth Wave want their listeners to find comfort in their music. They want their fans to feel safe; to be confident in who they are, and to know they're not alone with their feelings and anxieties.

“It’s a cathartic thing for both us and the listeners; we want to help with normalising being emotional and finding comfort within your sadness", the band went on to say.

With limited resources, isolation and continuing the self production they first began toying with on their 'Happy Days!' EP, "Everything Will Be Fine" is the first taste of the band's second album - due for release in 2021. 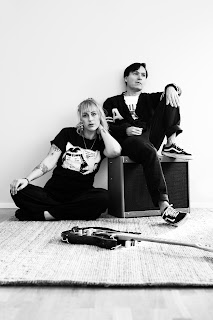 This is a beautiful gem of an Americana-song, both punkish rebellious and bittersweet melancholic in its expression. Helena Lindsten’s fantastic voice effortlessly turns from soft and fragile to explosive with brutally honest and heartfelt passion that brings both Phoebe Bridges and Courtney Love to mind.

”If there was one, I’d be in the canyon, searching for answers in the bottle, if just not so, seems I forgot my opener at home, once again forgot to make a list."

Luckily this song, seen in its entirety, depicts the human ability to see humor in tragedy and the comical irony of life.And that is a cheerful thought is’t it? - Fredrik Solfors