Crawford Mack has shared a new video for 'Turning' a song that's taken from his recent album '‘Bread & Circuses'. We had the pleasure of featuring three other tracks from this exceptional album and 'Turning' is another example from this talented and highly engaging contemporary artist. ===== Oracle Sisters have shared 'The Dandelion' along with a video for the song. The Parisian trio have something of a timeless feel musically and have developed some atmospheric, melodic and dreamy music with this gorgeous piece. ===== Owen Meany’s Batting Stance was featured a couple of months or so back and his new video for 'Krakow' is a beautiful accompaniment for this moving and sublime song. 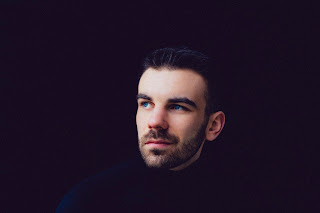 Glaswegian songwriter Crawford Mack performs with a sense of purpose and ardour in new video ‘Turning’. An ode to the legacy that people leave through their art, the new track is taken from his recently released debut album ‘Bread & Circuses’.

‘Turning’ exhibits Crawford’s diverse pallet, taking influence from his original jazz background, through to rock and classical, which he holds together with his singer-songwriter soul. Crawford comments “I wrote the track initially about being reminded of a former partner every time I hear certain music, so I flipped the roles and wondered aloud whether it was the same for her.

This track is part of my debut album 'Bread & Circuses'. It was initially inspired from messing around in Nick Drake's CGCFCE guitar tuning and trying to fit in a cello and clarinet line I'd picked up from Mozart Requiem. The guest Clarinet and Bass Clarinet feature is from Gustavo Clayton-Marucci.”

Directed and Animated by Alex Uragallo, the new abstract visual opens with a record spinning, which flourishes into everyday objects; a cleverly crafted metaphor capturing the idea that music evokes nostalgic memories. During the instrumentals of the track, colourful textured motifs created by Giulia Carisi encapsulates psychedelic-like sensations.

Of his new video, Crawford says “I got in touch with Alex Uragallo who is an animator I know from my time at college to ask whether he was interested in making a video that could use everyday objects to explore a theme of being reminded of someone every day when a song plays. Alex suggested collaborating with visual artist Giulia Carisi, to create colourful visual motifs that could be attached to the different instrumental lines, the motifs are inspired by her synesthesia when she hears the track.”

Recorded in Antwerp, the Crawford’s debut full-length ‘Bread and Circuses’ consists of ten tracks in which in his words “hopes will illustrate the conviction of an individual confronting their internal struggles, wrestling them to the ground but all the while waving a white flag of surrender.”

Parisian trio Oracle Sisters have shared ‘The Dandelion’, their new single and first taste of upcoming EP ‘Paris II’. The accompanying video, directed by Celia Marie and lead guitarist Lewis Lazar, is shot on double 8mm and takes the viewer through the personification of Paris. With the band as your beatnik tour guides, the video explores the gothic moods and noire spirit of the city.

Over the past twelve months, Oracle Sisters have built up a loyal and global following, blurring the lines between music and visual arts. Support for their music has come from NME, The Line Of Best Fit, W Magazine, Vanity Fair, Beats1, COLORS, BBC 6 Music, and more. This culminated in the critically acclaimed release of Paris I, mid-way through 2020.

Now, Oracle Sisters turn their attention to its sequel, their next EP ‘Paris II’ (due for release Spring 2021) with ‘The Dandelion’ the first taste of this new music. The track continues Oracle Sisters’ journey as musical auteurs that combine elements of rock, psychedelia, soul & disco into a sound that is truly their own. Speaking on the track, the band say, “the song is inspired by Chet Baker’s singing with a sort of disco back beat behind it”. Oracle Sisters’ influences are broad but also unconventional, and it’s this ability to dip into every musical style that sets them apart from their contemporaries.

With members hailing from across Europe, the band are uninhibited in their influences, finding inspiration within the art, cinema, philosophy, and music of the world over; resulting in a sound that is both sonically sophisticated and warmly familiar. Lyrically, they explore timeless narratives of love, mysticism and spirituality, scattered with intriguing insights into their own personal lives and experiences resulting in songs that are cryptic yet paradoxically familiar.

Oracle Sisters have been working hard in Greece currently finishing off their debut album. Along the road, they’ve also played impromptu shows on the island of Hydra with friends from The Murder Capital & Fontaines D.C – capturing the troubadour spirit of the band. 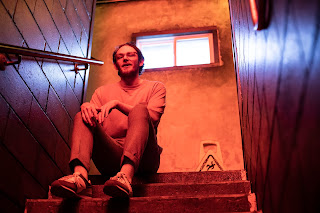 For Daniel, creating Feather Weights was a pursuit of catharsis – trying to understand his personal experiences. After delivering his self-titled EP and doing rounds of the live circuit, he collated eight thoughtful, singularly voiced stories, all recorded above a fishmonger’s shop in the Halifax Regional Municipality.

The latest addition to the Feather Weights narrative is a visual aid for the emotionally charged number, Krakow. The track itself is a reflection of loneliness and absence accompanied with lulling guitar and soft vocals. Written during the final days of an overseas tour in Europe, Daniel contemplates spending Thanksgiving alone, being surrounded by unfamiliar faces and missing important life events all whilst fulfilling his life’s passion.

Directed by Nicole Cecile Holland, the video manifests this separation, following a solitary Daniel traipsing desolate, icy wilderness, whilst constantly being haunted by memories of the people he loves despite his attempts to rid himself of them.

No stranger to telling stories, he explains the inspiration for Krakow: “It was Canadian thanksgiving but, as the lone Canadian in the hostel, was spent navigating language barriers rather than family chatter over the dinner table... During the course of the tour, I also missed out on major life events friends and family celebrated. The crux of the song is how pursuing what you love can take you from who you love.”