Multifaceted tattoo artist, TV star, beauty entrepreneur, author, fashion designer, and singer/songwriter Kat Von D continues her musical journey with the cathartic new video for her synthwave slow jam, “I Am Nothing,” the second single from her forthcoming debut LP Love Made Me Do It out August 27.

The video, directed by Linda Strawberry, captures the essence of the song and the album’s underlying themes of love, loss, and loneliness. Kat Von D explains: “It’s about the idea of not being good enough. You feel like you’re nothing and lament the memories of the past again. It’s the everyday challenge of putting one foot in front of the other when you’re running on emotional fumes. You’re also coming to terms with the fact it’s over.” Regarding working with the director, Kat says, “Working with Linda Strawberry on this video was a beautiful experience. I was already so inspired by all the work she’s done with the Smashing Pumpkins art direction as well as other music video projects she had beautifully directed.”

“The music video was inspired by the sentiment of isolation and how it relates to feeling alone within a relationship,” Kat says. “So if you notice, everyone in the video is confined to their own space the entire time. The set for the band’s performance scenes had 8-foot tall crucifixes made of mirrors that stood behind each band member, while walls separated each member from one another. So at no point could they see what the other person was doing. I wanted to give the feeling of opening an antique wind up box and seeing that tiny ballerina spinning around.”

“I Am Nothing” follows the album’s lead single “Exorcism,” which Billboard described as “a darkwave bop about love, loss and change.” Altogether, the songs on Love Made Me Do It comprise a soundtrack for the lovelorn that puts all of Kat’s soul and extensive classical training front and center. “‘Love Made Me Do It’ is a collection of all my hopeless romantic thoughts poured into one album,” she states. 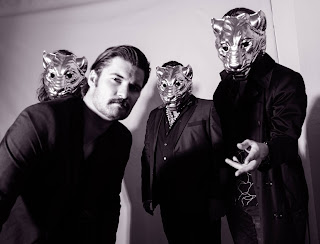 It’s not often that an act so elusive can strike at the heart of something so personal but it’s in that balance that you’ll find indie’s most exciting new act – Seven Purple Tigers. The band’s founders Austin Horn (singer/rhythm guitar) and Phil Dyszy (lead guitar/backing vocals) are an unlikely pair. From the US and Germany respectively, the trans-Atlantic duo bonded over their love of music in the vibrant basement bars and clubs of the Old Town of Kraków, Poland. It was there that the pair began crafting what would become Seven Purple Tiger’s signature sound that came to fruition after 5 years of writing together and performing live alongside bandmates Sebastian Heieck (bass) and Felix Schwer (drums); the sound that defines their latest single One Night’s Promises (released 25/06/21).

The track is a call to anyone who has ever wondered “what if?”. A reflective piece, One Night’s Promises reminisces on the moments of youth in which something, or someone, special slipped by. Times that leave you wondering what could have been if not but for one change. These calls to something that got away play in the duet between Horn’s longing vocals and Dyszy’s ethereal guitar that carry the track through its meditative verses and impassioned choruses.

Like Seven Purple Tigers’ previous work, One Night’s Promises wears its 2010s Indie influences on its sleeves while taking the torch and pushing the genre further, continuing the band’s work taking the old and making it new. Based out of Freiburg, Germany, Seven Purple Tigers create their music in the lovingly repurposed defunct restaurant of an inn. It is here that the group marry the classic American flair, European philosophy and artistic legacy, and existential explorations of timeless themes that create Seven Purple Tigers.