NY-based dream-pop duo Parrot Dream are sharing a new single, "Red Circle." Parrot Dream is the Brooklyn via Santiago, Chile duo of Christina Appel and Gonzalo Guerrero. Good Eye released their debut, Light Goes, which dealt with themes of disconnected memory and loss as the partners grappled with their different senses of home.

"Red Circle" is part of a set of material that they had planned on recording in a studio in 2020 and ended up recording in their home throughout the year. It's also their first new work operating fully as a duo.

"'Red Circle' has its origins in an older song that we pulled apart and rebuilt. The central song idea for this track is one we’ve held on to for a while as it’s evolved through versions and phases. The earlier version was lighter and minimalist, and we moved the song to a bit of a more somber place with space for the melody to expand. The lyrics allude to a lush, hazy kind of love that burns bright and heavy. It’s a love that requires negotiation under seductive influences; trying to hold onto clarity while consciously giving in." 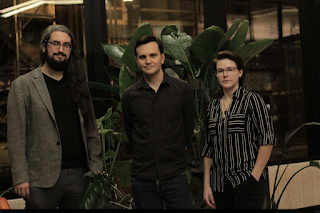 Taxiway began as a lo-fi bedroom solo pop project in early 2020. The idea came in late 2019 from a Spotify playlist Taxiway founder Mike Aurand created to listen to while traveling. Aurand says, “My wife Emily and I used to strategically choose which song we’d each listen to while our plane was taking off. It was a sort of ritual for us, the official start of whatever trip we were taking.” The comprised playlist consisted of chill electronica, trip-hop, jazz, and occasional singer/songwriter tunes. Aurand says, “I initially planned to make instrumental music that resembled the songs on my travel playlist, songs to listen to while the plane taxied down the runway, the quiet, tense moment before takeoff. When the pandemic hit, I decided to keep my mind occupied by writing real songs rather than just making instrumental loops. I began missing the thrill of traveling, which brought new significance to the name.” He drew from influences like Bjork, The Postal Service, and The XX and began recording in the early weeks of the COVID-19 pandemic.

Since Aurand shared a small one-bedroom apartment with his wife, who was studying for her bar exam only ten feet away, he had to figure out creative ways to make music without disturbing her. He recorded his vocal parts in a hushed manner, softly crooning into the microphone rather than singing loudly and forcefully. Gently strummed guitar replaced the abrasive hitting of the past. He omitted distortion pedals and power chords altogether in favor of reverb and delay effects. The resulting sound was unlike anything he’d previously recorded. He released a four-track self-titled EP of songs from those bedroom recording sessions.

Then something happened in late 2020 that changed things: A vaccine was approved, an actual *end* to the pandemic seemed possible, and Aurand’s musician friends started chatting about performing live again in 2021.  Aurand scrapped the EP and started from scratch. He sent the demos to his two friends, Joseph Jared (bass) and Caila Singleton (drums). They played their first show as a three-piece band at the Springwater Supper Club on July 21, 2021, which also happened to be Aurand’s three-year wedding anniversary. Their album, Absence, is set for release on November 5, 2021.

Born Edward Davis McKenna in 1989, singer/songwriter Eddie Davis expressed a passion for entertaining at a young age and portrayed a natural ability to do so.

Surrounded by vinyl, he was influenced by 60s and 70s era classic rock music and inspired by big vocals and colourful imaginative lyrics.

This passion transformed into a genuine desire to emulate the monumental artists of that time through his own meaningful writings and performances. Using that passion to hone his craft, he is releasing his first solo project with his debut single, “Billboards & Barracudas”.