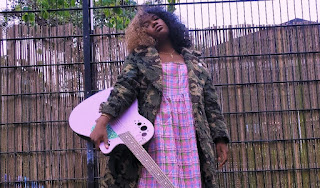 Mixing elements of bedroom pop and indie rock, Lilith Ai’s sound combines authentic lo-fi soundscapes and introspective lyrics. The artist is back with a stunning new offering ‘IRL’. Opening with a gentle guitar line and wistful vocals, the track eventually builds to an emotive climax with candid lyrics and vigorous chords. ‘IRL’ is a soft indie gem that hits you with feelings of nostalgia and melancholia.

“If you hold up a mirror to your life and realize how fucked things are, how you/me/we did this shit but at the same time we are products of this environment doing and trying our best. So in all the guilt we need empathy. this is it, we can’t restart the game, or reboot cos it's IRL. This is it.” Lilith Ai shares.

‘IRL’ follows on from two singles Lilith Ai released this year, ‘Black Cherry’ and ‘Bloodlines’ have gained huge support from acclaimed music publications such as Wonderland Magazine and Link Up TV.

Lilith Ai is a guitarist and singer-songwriter, who writes and performs poignant tales of modern life. Hailing from nowhere special, Lilith began releasing lo-fi bedroom recordings in 2016. Her first EP ‘Riot’ is full of underground anthems popular with Riot grrrls worldwide. Having honed her craft over the years, Lilith Ai has proved she is an artist only going from strength to strength.

Country and soul singer-songwriter Cameron DuBois’ unique artistry is solidified on a new single project called “The Light,” which the Alabamian songstress composed in two separate arrangements. On Friday, November 26 she’ll release the original up-tempo guitar version of the song across all digital platforms (linktr.ee/CameronDuBois), and teasing today with a new lyric video released on her YouTube. The new song came from some recording sessions DuBois had with hit-making producer Bill McDermott (Tim McGraw, Brad Paisley, George Strait) at OmniSound Studios in Nashville.

The ambitious song project also demonstrates Cameron’s ability to reimagine her music in varying styles. On Friday, December 8 she’ll release a more orchestrally inspired arrangement of “The Light,” along with a beautiful video filmed at the historic Montgomery Performing Arts Center, in the singer-songwriter’s hometown. Cameron and her piano are eventually joined by a two piece string section of Cello and Violin, for an equally uplifting orchestral presentation of the song, and highlights Cameron’s proven ability to pull her audience in with her dynamic vocals.

“I wrote this song with Rick Hansen and Bill Hinds, and I think it has a very powerful message for anyone who is in the process of losing, or who has ever lost someone close to them,” said DuBois. “We tried to capture this emotion musically, in multiple versions, to show different types of emotions we experience when losing someone close to us.”

Fronted by powerhouse vocalist/songwriter/guitarist Lily Vakili, Vakili Band has unveiled the video for their newest single, “Dreamy Dreamer.” The video comes with the announcement of their sophomore album, Walking Sideways, scheduled for release on February 25, 2022.

Born in Honduras before living in the US, Bangkok, and Puerto Rico, Vakili worked in theatre and went on to carve out a successful career as a biotech lawyer while continuing to nurture all manner of dreams, including making music. Influenced by artists such as Patti Smith, Prince, Iggy Pop, and Rage Against the Machine, Vakili Band is unafraid to explore the sonic possibilities of Peace, Love, and Justice, as evidenced on the song of the same name on the band’s first album, Oh Alright.

“Dreamy Dreamer” was originally written in response to powerful social justice issues such as the Dreamers, #MeToo, and Black Lives Matter. However, it evolved as Vakili watched her mother struggle with, and eventually pass away from, Alzheimer’s Disease. The new song, recorded and produced by David Amlen at Sound on Sound Studios in Montclair, NJ, and mastered by Grammy-award winning sound engineer Greg Calbi of Sterling Sound, is both a battle cry and a hymn for every individual who dreams of a better world. 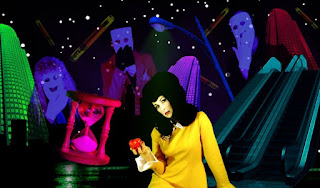 Enjoy the kaleidoscope of magical beauty of the landscape of art created by Steven Cerio and move like a porpoise down at the local bog with Petunia and friends at a curious party that is sure to dazzle and delight.

A notable artist, filmmaker, and author, Steven Cerio created his own loving and sarcastic expressions of joy for over three decades. His unique style helped set the stage for the neo-psychedelic revival in New York City. Started in 80's zines and soon after called upon by galleries and diverse clients including Nickelodeon, Comedy Central, Warner Brothers, Fantagraphics books, Entertainment Weekly and Penguin books. He created art for music acts The Residents, Monster Magnet, Les Claypool, Renaldo and the Loaf, Moe, Widespread Panic, Negativland, and more.

Petunia-Liebling MacPumpkin is an escaped ghost from an old coloring book that was left out in the rain at some point in the 20th Century. Pinnipedia Pounce is the 13th video taken from her second album (I Left My Heart in Uncanny Valley). She also recently curated a remix album entitled All My Friends Live In Uncanny Valley, featuring the likes of Renaldo & The Loaf and Toxic Chicken gleefully rearranging her songs into strange new forms.