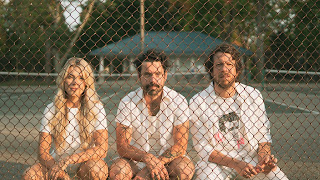 Produced by Zane Whitfield (The Glorious Sons, Sarah Harmer), this triumphant 90s rock anthem sparkles and uplifts, as it reminds us of our resilience as humans, and that sunnier days are always around the corner. We dedicate it to all of our grandparents, who worked so hard to give us a better life.

"Schönsee" means beautiful lake, named after the Russian-Mennonite colony in ode to drummer Katrin Sawatzky's ancestors, who made the Great Trek across Europe by caravan to escape religious persecution in WWII.

Prominently featuring the voice and songwriting of Katrin, who sings in both German and English, this song builds upon the German lullaby often sung to Katrin as a child, telling the story of curiosity, resilience, fear and hope for a better life.

"Schönsee" summons an inner feeling of safety and peace when the world around you feels chaotic. The feeling of triumph after tribulation. The elation of making it out alive. 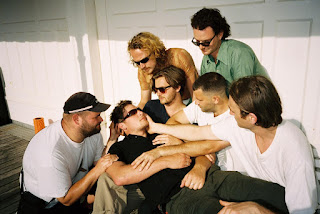 Brighton based 7-piece Keg today announce their new single "Farmhands" alongside an otherworldly animated video directed by Andrew Howarth - which drops the septet into the "Smelve Village" - eventually succumbing to a sea-beast-version of the band's guitarist Frank Lindsay.

New single "Farmhands" was produced by the band and mixed by Sean Oakley (Show Me The Body, Sorry, Scalping, Kae Tempest) and is the latest single to be lifted from Keg's debut EP 'Assembly'.

Described by the band as: "a lovestory to St James Street [in Brighton] and its many erratic personalities and the eternal clash of oat flat whites and heroin poos" - "Farmhands" carefully builds from its driving, post-rock opening, singer Albert Haddenham riling against the gentrification of Brighton's city centre: ["My bamboo products quake in their cupboards / My macchiato spills over the plant ladder / All the greasy spoons hemmed in by bike shops / Their dishwashers shrink and fall down the drain"] - interspersed with trombone-laden breaks and moving towards an erratic brass-fuelled crescendo.

Speaking on the track's accompanying video, the band said: "In the summer in Brighton, the city council were giving homeless people train fare money to leave the city. I remember thinking this is an obscene solution to a really serious undeniable housing issue. The stark contrast of real poverty and gentrified coffee/juiceries is quite startling along most of the south coast, I’m sure everyone has an equivalent. The video came from us imagining the lyrics taking place in a small magical toadstool town of ‘smelves’ and seeing their reaction. If I could summon a sea beast I would." 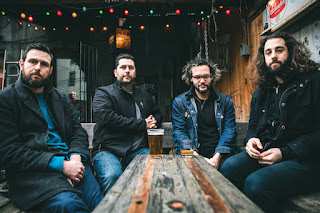 What was originally written at the beginning of a supposed to be busy 2020 for Looms turned into a larger recording project as they navigated the pandemic. The themes of love, loss and isolation were in place pre-shutdown but turned out to be all too timely as they were eventually completed remotely.

The EP release includes two brand new tracks, "A Different Kind of Light" and "Nothin' Didn't Change," closing and coalescing with a sound that FLOOD Magazine noted it lands, "somewhere between the alt-country flavors of Wilco and the heartland rock inclinations of The War on Drugs."

Here is a bouquet of the gathered years
The countless unfolding of momentary togetherness
Standing in circles has been so important
To ring the bounds of the ancient well
And glimpse the divine as it slips
From the flat, black waters of the underneath
This is the sunken source of many tongues
Where our sciences and our spells are but a different variety of same.

This first single acts as a fitting introduction to the musically eclectic album which touches on zany New Wave, baroque-pop and 1970s art-rock. Kladzyk's upright Steinway piano sits at the beating center of "Fear," flanked by fuzzy guitars and emphatic percussion.

Speaking about the single, Kladzyk explains: "One time a psychic told me that a curse was placed on me in the womb, and of course that was bullshit, she tried to sell me $800 in crystal therapy to lift the curse. But at the same time, intergenerational legacies of addiction, abuse, trauma and mental illness seep out at very inconvenient moments and for me often take the form of wondering if I’m cursed to destroy myself or the ones I love, just like some of my ancestors. This song is a journal entry from a day I felt very weighed down by that baggage.

"Musically, "Fear" is indebted to The Roches, the Plastic Ono Band, Richard and Linda Thompson, and John Cale. Arranging it was a fun and intuitive process in collaboration with Don Godwin, and it arrived pretty naturally at its final state." 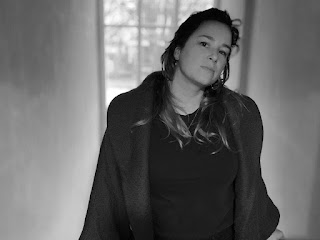 The Vancouver, B.C.-based songwriter, Ashley Shadowhas just shared the video for her recent Pitchfork, Stereogum and Brooklyn Vegan-tipped single, "Don't Slow Me Down" (feat Bonnie "Prince" Billy). The visual piece, directed by Tyler McLeod, comes off the back of critical acclaim for the recent album, Only the End – out now via Felte – which found positive support from Pitchfork, MOJO, Stereogum, Brooklyn Vegan, All Music, Secret Meeting and more upon release.

The video is a moving addition to the music. Filmed separately it finds Ashley and Bonnie "Prince" Billy (aka Will Oldham) connecting in isolation to produce something that touches on nostalgic references, presented with stuttering tape reels and analog effects.

Speaking about the making of the video, Ashley says: "Since we had trouble connecting in the flesh with Will Oldham we decided to get creative with our approach to this video. I asked Will to send some footage to the song with little direction and said to get as weird as he wanted with it, he’s a professional.

When Will’s footage arrived Tyler McLeod and I were pumped up and the gears started turning. The creative juices were flowing and it all unfolded a wave of cosmic vibrations. Through analog effects and nostalgic references the video took on its own life and we succumbed to the creative forces of multi-dimensional techniques. Thus a video was born."