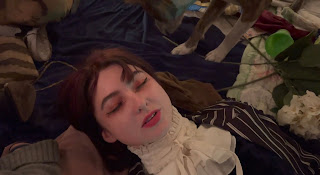 Vera Ellen has proven she is unstoppable! She has today released yet another video, this time for album closer and tear-jerker 'Joy'.

“I wrote ‘Joy’ for my nephews and nieces, who forgave me over and over for leaving them to pursue music, and who love me unconditionally. Children are magic.”

The video was filmed by Al Kalyk at the artist's 'It's Your Birthday' listening party in Los Angeles. It was filmed on an iPhone in a single shot and features Vera's backyard and a handful of kind friends. In the footage taken by Vera's mum in the 90’s seen at the end of the video, you can see Vera's sister holding her as a baby and her grandparents and family singing a polish lullaby. The Ragged Roses - Falling Out Of Love.

Now, take 2 gallons of Wanda Jackson,2 Gallons of Etta James, a spoonful Howlin' Wolf, a shot of Dick Dale, Add some Cramps and a pint of Nick Curran, mix that all up, shake it, stir it, and light it on fire. The result you get : The Ragged Roses

The Ragged Roses combine the rock & roll spirit of the 1950's with the attitude of modern roots gunslingers. It's a new band, female fronted by Katrien, the embodiment of wild performing art, combining stunning vocals with stunning looks, being backboned by - you can call them although their relative young age and wild raging hearts - veterans of the Belgian roots scene.

Watch out for that slapping, walking, gypsy swinging upright bass and lightning blot guitars, surfing on a wave of groovy drums.

The Ragged Roses are now releasing their Debut album "Do Me Right", containing all self-written original songs and one cover of the great Del Shannon. 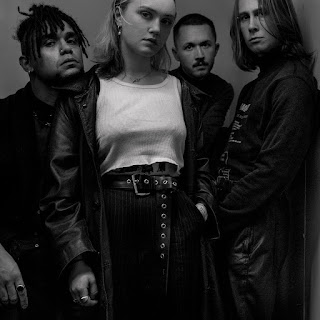 The Ninth Wave - What Makes You a Man.

Glasgow's The Ninth Wave today announce their second album Heavy Like A Headache will be released on 11th March 2022 via Distiller Records. Alongside the album announcement, the band are releasing their new single "What Makes You A Man" with a stirring black and white accompanying video; the final installment of a trilogy of videos directed by Rianne White.

The new single and album announcement arrives off the back of a sold-out UK tour and a Scottish Album Of The Year nomination for their Faris Badwan (The Horrors)-produced EP ‘Happy Days!’. Heavy Like A Headache is the band's second full length album following their 2019 debut Infancy which garnered widespread critical acclaim and nominations for the AIM Award Album Of The Year and Scottish Album of the Year.

Produced by the band themselves and mixed by Max Heyes (Massive Attack, Doves, Primal Scream), Heavy Like A Headache explores feelings of grief, anxiety, anger and loneliness, and represents the 4-piece's most triumphant and diverse body of work to date.

New single "What Makes You A Man" tackles issues of consent, airing Millie Kidd’s deeply personal lyrics ["I will feel the shame that you don't feel / And I won't feel the same now this is real"] with a heavy, lurching instrumental that seethes with defiance.

Speaking on the release, Millie said: "What Makes You A Man is as claustrophobic as it is cathartic. It’s a journey of self deprecation, and how one event can be such a throwaway meaningless action for one half but be life changing for the other. I don’t want to blame myself for the degrading actions of others anymore - I want to stand up to this shame I hold with me, and recognize that it is not mine, I’m just the one carrying it. 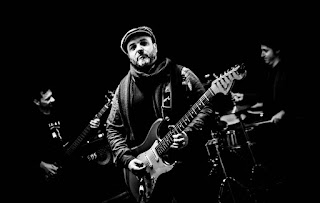 Emerging from an eight-year hiatus, songwriter Gianluca Divirgilio brings his darkest and most introspective thoughts to light with Arctic Plateau’s Songs of Shame. Thought by some to have seen its final days, Arctic Plateau instead became a vehicle for Divirgilio to battle his demons; to chronicle struggle, self-doubt, pain, disillusion, and guilt, and ultimately to allow his scars to take form as Songs of Shame. In doing so he has returned with an album of intimate and powerful performances that serve as the first steps toward a healing that has been decades in the making.

A series of impressions drawn from Divirgilio’s own experiences in the time since the band’s last release The Enemy Inside, this record is a compendium of lost love, missed opportunity, crestfallen remorse, and lasting trauma, self-inflicted and otherwise. It is a deeply personal record that often points its finger at the mirror and winces as it’s reflected back. But in its complex self-exploration it also gains life as a living document affording the artist an opportunity to turn the page, and by accord provides its audience safe space to look to the darkness within, feel the emotion freely, and eventually discover a path through.

The compositions on Songs of Shame mirror the duality of its themes, utilizing the disarmingly upbeat aesthetics of post-punk to balance the often-grim themes contained within the lyrics. They draw from the stark self-reproach of proto-goth, the bare honesty of singer-songwriter music, and the enigmatic sparkle of post-punk to create a strikingly memorable sonic landscape for the listener. Focusing these laments through the lens of something far brighter and more buoyant sows the seeds of healing in a manner that would be far less affecting were they represented in a parallel, dirge-like manner.

While the themes center around the many ghosts that haunt us, it is the music that makes them corporeal and affords the opportunity to create tangible separation, and that is ultimately an act of joy that befits the spirited expression witnessed in the songwriting itself. Songs of Shame is an album that channels sadness and exhibits a tortured soul lay bare, but there is a formidable maturity in its honesty and triumph in its catharsis, giving it the dual quality of lifting the listener up while acknowledging the daunting weight of carrying sorrows through the years.