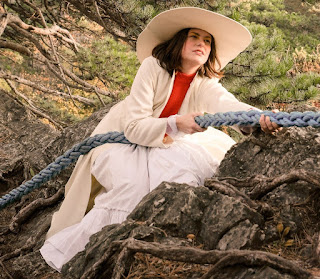 Untie the knot, set sail, run away - that's her plan. If it weren't for that hand that keeps pulling the rope back ... In her indie pop anthem ‘Ocean Girl’, gently kissed by melancholy, the modern Trobairitz Amelie Tobien sings about life jackets that are too tight and lifts anchors to the surface, entangled in seaweed. Ropes get cut like umbilical cords and the compass needle is poled to freedom, the longing for emancipation breaks through Amelie's lines like cold rays of sunshine between clouds.

‘You can't come with me,’ she says, and yet she pulls us into a sensitive river full of interpersonal flotsam. A gentle ‘... this time’ adorns the horizon as a ray of hope without sinking into false promises. With ‘Ocean Girl’ Amelie Tobien presents a gentle ballad about letting go.

The singer-songwriter Amelie Tobien, born and raised in the mountains of Salzburg, developed her artistic work in the wine regions of Bordeaux and perfected her inimitable voice after work in Dublin's whiskey-soaked bars. After her debut album ‘We Aimed for the Stars’, Amelie Tobien is now targeting the seven seas with her single ‘Ocean Girl’, which will be released on January 21st. 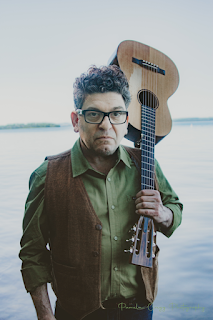 is a storyteller. On his poignant, natural-sounding acoustic tenth album, The Story That Lived Here, the Edmonton-based songwriter, guitarist, and author sings stories told to him by friends and fans. Songs about library ladies, yard sales and dive bars, accidents and grieving; and – because we’re living through a pandemic still – at least one song about the end of the world.

“In case it’s the end of the world, I’m gonna have a cinnamon bun…” Sures quips to kick the record off, addressing a universal desire for comfort going hand in hand with a newfound vulnerability. In “Before We Had Sarah” a couple with grown kids try to romantically reconnect (though they live in the same house); while “Boring People” is perhaps the most sparse, evocative performance of Sures’ career to date. Nearly every song on The Story That Lived Here has a strong, tender, sing-along-able chorus, including “Cry Like A Flood,” which is Kat Goldman’s story of a music career interrupted; and “No One Will Remember You,” which conjures cover bar culture.

Two of the songs on The Story That Lived Here are inspired by Sures’ relationship with his father, ceramic artist Jack Sures, who passed away in 2018 and who the album is dedicated to (along with Mitch Pololak, Michael Laderoute, and Thérèse Duffy). “We put so much stock into people at the end of their life,” Sures says about the title track. “What was the last thing they said? The person is often on the wickedest cocktail of their life and they don’t know where they are. The meaningful time is the life.” In “Father’s Shoes” Sures paints a portrait of his relationship with his father and finds an apt metaphor for grieving that could apply equally as well to his music: “They’re a funny combination of neon green and blues,” he sings. The shoe fits. 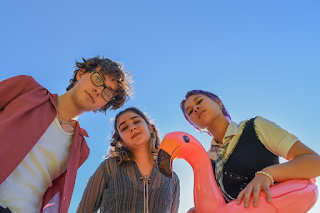 Flamango Bay have today announced details of their debut EP 'The Fool', set to be released on 13th May via 0800-MOSHI-MOSHI. To celebrate, they share new single 'LA', which was written shortly before moving to the eponymous city.

"Because of life circumstances and the pandemic, we really romanticized moving to LA," say the band, who are originally from the Bay Area of San Francisco. "We put a lot of expectations on the city to fix our internal problems. However, when we actually moved there, we were still the same people with the same problems."

"Musically, the song is inspired by pop artists like Harry Styles, Lady Gaga and indie acts like Surf Curse, and probably anything off the Spotify Surf Rock Sunshine playlist."

Speaking about the 'LA' video, the band said: "we came up with a storyline loosely based around this drive from the Bay Area to Los Angeles, a journey we've been doing a lot recently."

"Ligaya Chinn (the protagonist) is moving to LA, and along the way gets a mysterious invitation to a party. Once she gets to LA, she meets up with us (Flamango Bay) and, after taking in some iconic Los Angeles sights, she goes to the party. At first it's fun, but when she goes to get water, she realises everything is not what it seems. The video ends with an ominous yet silly tone, representative of our feelings towards living in LA." 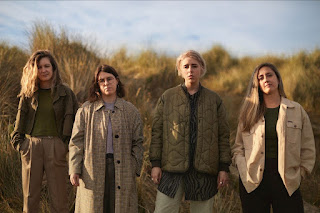 Pillow Queens - Be By Your Side.

Dublin's Pillow Queens had been quietly building momentum on their side of the Atlantic since the release of their 2017 debut EP Calm Girls. Selling out shows in their native Ireland, supporting artists like IDLES, Pussy Riot and Future Islands, and earning enthusiastic support in the UK before they independently released their 2020 LP In Waiting.

The album was a major breakthrough for the band, earning them praise from outlets like The Guardian, who called them "2020's most exciting indie rockers," NPR, NME, DIY, and The Line of Best Fit, a Band To Watch feature from Stereogum, an Irish Album of The Year nomination, and most remarkably of all a US national television appearance on the Late Late Show w/ James Corden.

The band are returning to announce their sophomore LP Leave The Light On, which is due out April 1st on Royal Mountain Records, and sharing the first single from the new album, a track called "Be By Your Side".

"This song is about the mechanisms that are used to hide your vulnerabilities and carry on," explains singer/bassist Pamela Connolly. "But also, the feeling of being about to burst and how cathartic it could be to allow yourself to let your emotions out and feel the world around you. This was one of the first songs we finished on the album as it was the quickest to become fully realized by all of us."

The album announcement coincides with the announcement of the band's first North American tour, which will include a stop at SXSW before the band return to the UK in May and their native Ireland in October. Full details can be found below.

From Frances Grace Miller of Mear: In 2014, I lost the ability to do a lot of things I'd previously taken for granted.

I wrote "The Order" during my early experiences living with a post-viral chronic illness, at a time when I was grieving the loss of my health.

I found I couldn't read for more than a few minutes a day and a short walk around the block could leave me bedridden. "The Order" was an attempt to voice some of the pain and loneliness of that; of not understanding what was happening to me. This single is from our upcoming full-length album, which will be released on April 22nd.

Being diagnosed with a chronic illness is often a long and painful journey full of misdiagnosis and gaslighting, "when nothing's right and nothing's wrong." The song's title is a reference to the loss of control that comes with no longer being able to count on your body.