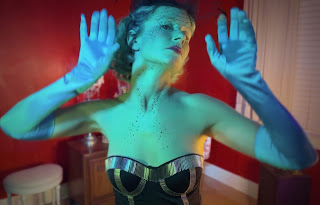 LA based performance artist and mastering engineer, Rebecca Huston, aka, Romantic Thriller says her music is inspired by film noir, the dictionary states of the film genre: it’s marked by a mood of fatalism and menace. The avant garde artist weaves an intricate tale on her new offering ‘I Cannot Tell’. Eerie synths and an enigmatic vocal line make up the haunting soundscape of the track, making for an otherworldly listening experience.

The track tells the story of teenage love, jealousy and big personalities that perhaps cannot coexist. Huston details the characters in her story; Cynthia, Heather and Jesse. On a mystifying night in the woods behind a fairground, things change forever as Heather goes missing and Cynthia and Jessie’s worlds collide.

“Though no one knows a thing, really… about what happened that night in the woods, there are details Cynthia has never been able to bring herself to say. Would Jesse understand? Would Heather still be here if she revealed her secret? She cannot tell.” - Huston says on the track’s story.  This track and others in her catalog have interwoven storylines and recurring characters.  She says she likes to think of them as tantalizing blurbs on the back of campy serial teen romance novels.

The release arrives with a music video that captures the story being told through Lynch-inspired dreamy visuals. Hazy imagery of the fairground and the woods transport the audience to the fateful night that is captured in ‘I Cannot Tell’.

Huston has been musical from the start, playing violin and oboe in school. She comes from a creative background and to this day surrounds herself with friends with innovative endeavours. Huston honed her craft over the years and her life experiences led to her identity of Romantic Thriller. Comparable to musical misfits such as Grimes, Ashnikko and FKA Twigs, Romantic Thriller creates pop music with a mesmerizing quality that drags you into a mystery story you MUST solve. Van Chamberlain is a Brooklyn-based indie rock band. Having grown up making music together on a shared wavelength, brothers Van & Jacob began playing under the name Van Chamberlain in 2019. They make music that combines dream pop and jangle, with a slight 90’s alternative influence showing through. They’ve each played and toured the world in bands including Phantom Buffalo (Rough Trade Records, Time Lag) and Eternal Drag (members of The Dodos). In 2019 they found themselves reunited in Brooklyn, and immediately began crafting their new record, In the Sun.

The band released their first studio-demo, LY, in 2020, right on the cusp of the global pandemic. Having to cancel their live debut, they instead turned to the recording studio. Their first LP, In the Sun, was finished in 2021. By the end of that year Van Chamberlain signed with Very Jazzed with a release scheduled for March 2022.

In the Sun is an album about layers, both sonically and philosophically. Driven by textures of guitars, lush reverb, and grounded by infectious percussion, In the Sun offers sonic choices that feel new and undiscovered every time you put the record on. While Van’s laid-back vocal style offers the disposition of a sunny day with little to do, his lyrics draw from personal experiences of loss and subsequent growth. Their layered sonic approach reaffirms the band’s philosophical message: that what’s past is prologue, and the future holds promise, but neither will count unless you make peace with the present. 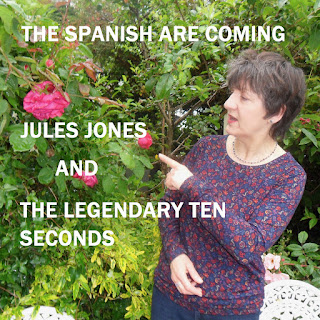 Jules Jones & the Legendary Ten Seconds - The Spanish Are Coming.

The Legendary Ten Seconds started off as the solo music project of Ian Churchward during the time when he was the lead guitar player of The Morrisons who were featured on John Peel's radio one show back in 1987. In 2013 Lord Zarquon joined Ian's music project and since then various guest musicians and vocalists have helped out in the recording studio. The most recent musicians to join the project are Phil Swann and Martyn Hillstead.

The Legendary Ten Seconds have recorded many critically acclaimed English folk rock albums which chronicle the Wars of the Roses and the life and times of Richard III in England during the late 15th century. The albums are available on Amazon and itunes and the band have donated money to a scoliosis charity from some of the income generated from the sale of their music. The CD versions of the albums are available via the Richard III Society in the UK.

In 2018 the band recorded the Mer de Mort album which was commissioned by the Mortimer History Society to commemorate the Society's tenth anniversary. It is a historically accurate album of songs which tells the story of the significantly important Mortimer medieval family from their roots in Normandy prior to the battle of Hastings and into the 15th century. The album includes historical narratives read by the actor John Challis ( Boycie in Only Fools and Horses ) who was the patron of the Mortimer History Society.

2019 saw the release of four albums, Devon Roses, History Book Part One. Instrumental Legends and Thrilling Blunder Stories. In February 2020 the History Book Part Two album was completed and this was followed by The Acoustic Almanac, Amazing Songs and the Pageant of Torbay Part One albums. Additionally a new version of the first Richard III album was released in digital format via Circle of Spears Productions. The new version of the album features fictional narratives written by Sandra Heath Wilson. Following the release of the Pageant of Torbay Part Two and the Semi Acoustic Almanac albums in 2021, the latest album contains songs all about Devon. This album is in the format of a Torquay radio show with jingles recorded by the band and introductions by Riviera FM's Peter Cartwright.