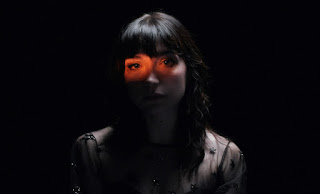 Flower Face - The Shark In Your Water (Album).

Montreal multi-hyphenate artist Ruby McKinnon aka Flower Face, shares her artfully crafted new album, The Shark In Your Water, via Nettwerk. The ten-song collection is a devastatingly beautiful exploration of when “love becomes an obsession.” McKinnon shares stories of heartbreaking intimacy, working through traumas of love, and the constant struggle of self-identity.

After finding a fanbase online through DIY releases Baby Teeth (2018) and Fever Dreams (2017), Flower Face has established herself as an artist to watch, receiving rave reviews from Alt-Press, American Songwriter, Ones to Watch, FLAUNT, Under the Radar, and more. In addition, she performed to captivated crowds on an east coast run supporting SYML as part of his Sacred Spaces Tour.

A multi-hyphenate artist, Ruby McKinnon creates melancholic folk music with a bedroom pop heart under the moniker Flower Face. Taking inspiration from her own vertiginous life experiences, alongside such varied sources as Lemony Snicket’s Series of Unfortunate Events, Jesus Christ Superstar, the oeuvre of Mads Mikkelsen and her dog Ziggy, Flower Face’s musical testimonials recall the jagged emotion of Bright Eyes while conjuring the ethereal ecstasy of a fresh wound.

Classically trained in piano since the age of 5, McKinnon began writing her own music at 14. Encouraged by her music-obsessed parents, she formed Flower Face in true D.I.Y. style: recording her independent debut, Fever Dreams, almost exclusively on her dad’s GarageBand app. Teeming with acoustic heartbreak hymns, it didn’t take long for the album to find space on bedroom playlists alongside The National, Daughter, Big Thief, and Mazzy Star.

Flower Face · The Shark in Your Water 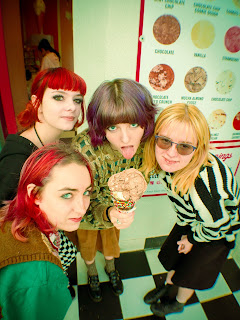 The Inflorescence - Board Game.

Thank San Diego for giving us Iron Butterfly, Blink-182 & Stone Temple Pilots but it’s got another distinction now. In 2019, a group of wise-beyond-their-years SD teens, singer/guitarist Tuesday Denekas (they/them), drummer Milla Merlini (she/her) and bassist Sasha A’Hearn (she/her), rose like punk-pop phoenix’s from the ashes of their previous band to corral guitarist/singer Charlee Berlin (who owned but didn’t know how to play her instrument at first) to resurrect Denekas’ songs of heartbreak and determination, starting out as the Fluorescents with 2020’s noteworthy ‘self-titled’ EP.

Proudly christening themselves The Inflorescence, the band found the right home with Kill Rock Stars to unleash their debut LP Remember What I Look Like (due Summer of 2022). The group faces challenges like juggling high school and college classes, finding all-age venues in town to play and rejecting gender labels as they explain: “in a largely male-dominated industry, we see how undermined we are for being a no-man band, and we see how being on stage empowers alternative girls and non-binary people.”

The stunning debut LP Remember What I Look Like, out June 10 on Kill Rock Stars, was conceived during quarantine and draws on the band’s inspirations, including indie, punk, emo, grunge and alternative.  Tuesday Denekas’s songs of shattered, disappointed romance sound triumphant in these infectious songs that are propelled by Milla Merlini’s thunderous drums, Sasha A’Hearn’s steady, anchoring bass and Charlee Berlin’s stinging guitar leads.

The confident nine-song album has zero dull spots or wasted songs. Starting with the sinuous, fast-paced “Phantom Feelings” and the resilient, stomping “So Much of Nothing” to the start/stop drama of “Are You Sorry” and the deceptively sweet, bouncy “Last Week” and the hair-pin turns and resilient defiance of “The Truth” to the brief respite from the title track which launches into the epic, gripping “Tomorrow Night” and the desperate grunge power of “The Button,” finishing off with the roaring climax of “Board Game,” it’s a rollercoaster ride of thrills and anguish to strap in for.

"Board Game" is probably the most desperate song on the album. At this time in my life I felt very manipulated, like I wasn’t being myself anymore and that the people I surrounded myself with didn’t really care about me at all. I felt like I was just a piece of someone else's puzzle, not my own. Instrumentally and structurally I took a lot of inspiration from the song “Your Best American Girl” by Mitski because of how powerful the instruments sounded. The final line, “I don’t know why but I can’t recognize you anymore.” feels like the perfect way to end this album and ties with the album name, Remember What I Look Like.