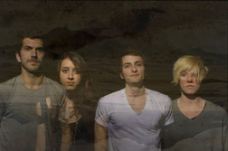 Background: The people have spoken and Beast Make Bomb came out victorious over 1000 other bands entered in Converse’s “Get Out of the Garage” competition. Female-led punk band Beast Make Bomb earned themselves a spot at the Rolling Stone SXSW showcase, sharing the stage with Queens of the Stone Age, J Masics (Dinosaur Jr.), The Black Angels, and more. Their new EP, Sourpus, follows up their critically acclaimed freshman effort, Skinny Legs. Beast Make Bomb describes themselves as “a marriage between punk attitude and pop sensibility”. Their live shows convey these thoughts exactly. They play tightly knit punk songs with the perfect amount of messy rock exploration, catchy guitar riffs, and melodic female vocals. “Coney Island” off their new EP, is reminiscent of Camera Obscura’s early work and “Rough It Out” shows hints of hair-tossing, Brazilian girl-rock outfit C.S.S. Hailing from all over the country, Beast Make Bomb calls NYC its home playing local Brooklyn hot-spots and his
Post a Comment
Read more
More posts