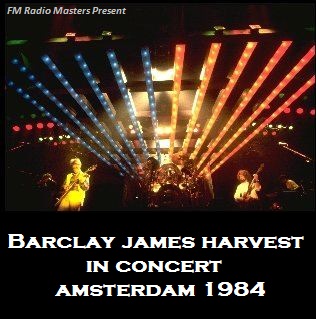 This is Barclay James Harvest live in concert in Amsterdam, Holland back on the 25th May 1984.

After signing with EMI's Parlophone in the UK for one single in early 1968, they moved to the more progressively inclined Harvest label. Their self-titled debut album was released in mid 1970 to positive reviews, but few sales. Their second album Once Again gained more favourable reviews, and the tour that followed was conducted with a full orchestra under the guidance of Robert John Godfrey. Their third album Barclay James Harvest and Other Short Stories was an even greater achievement, though Martyn Ford was brought in to supervise the orchestral work after Robert John Godfrey departed over writing issues behind "Mockingbird" - one of the group's most consistently popular tracks. By the release of their fourth album, Baby James Harvest, in 1972, the pressures of touring were beginning to have an impact on the band, and the album's inconsistency was noticed by both fans and critics alike.

After this album, they departed from EMI, and signed to Polydor, the move immediately resulting in greater sales. The next album, Everyone Is Everybody Else (1974), is viewed by many as their artistic high point. The album being played extensively on Radio Caroline, and later appearing in their Top 100 All Time Albums Chart. It also led to the band being invited to a BBC Radio 1 session for John Peel. The double live album, Barclay James Harvest Live, which followed in late 1974, built upon their solid fanbase, and was the first to chart in the UK, reaching number 40. Time Honoured Ghosts (1975), recorded in the USA, followed and this also charted in the UK reaching  number 32. Octoberon followed in '76 and reached #19 in the UK. They finally broke into the mainstream European market with their 1977 set Gone to Earth, which contained the song "Poor Man's Moody Blues", a homage to that band's 'Nights in White Satin', and also a title foisted upon Barclay James Harvest by press critics in the early 70s.

Woolly Wolstenholme – whose mellotron playing was a trademark of the band's sound in the 70s – left in 1979 after the album XII. Woolly pursued a short solo career fronting Maestoso, before retiring from the music business to pursue farming.

The remaining three members continued. At the height of their success, they played a free concert in front of the Reichstag in West Berlin, with an estimated attendance of 250,000 people (30 August 1980). They were also the first Western rock band to play an open-air concert in pre-Glasnost East Germany, playing in Treptower Park, East Berlin on 14 July 1987 to a 170,000 plus audience.

The band continued as a trio with regular guest musicians until 1998. One album, Welcome to the Show, released in 1990, was released under the abbreviated name BJH. However, because of criticism from fans, the full Barclay James Harvest name was restored, albeit with the inclusion of the BJH moniker.

In 1998, musical differences in the band saw the three members agree to take a sabbatical. John Lees subsequently released an album mixing new songs and BJH classics, entitled Nexus, under the band name "Barclay James Harvest through the eyes of John Lees". Woolly Wolstenholme played in (and composed for) this band, subsequently resurrecting Maestoso to record and tour with new material, as well as back-catalogue favourites. Les Holroyd and Mel Pritchard teamed up to record under the name "Barclay James Harvest featuring Les Holroyd". Lees and Wolstenholme recently (2006/7) toured under the slightly modified band title "John Lees' Barclay James Harvest".

Mel Pritchard died suddenly of a heart attack in early 2004. Woolly Wolstenholme very sadly took his own life in December 2010 having apparently struggled with depression for many years.

The two derivatives of the original Barclay James Harvest continued to record and tour until today, and enjoy ongoing popularity, particularly in Germany, France, and Switzerland.