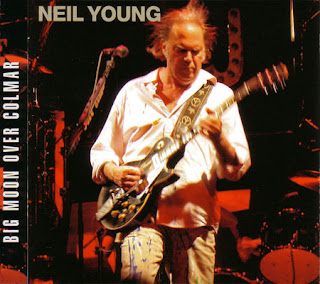 This is Neil Young live in concert at  Le Theatre de Plein Air, Colmar, France, back on Friday. August 15th, 2008. This recording was circulated on a two silver disc CD bootleg entitled 'Big Moon Over Colmar' and released by bootleggers Crystal Cat Records (915-16). The sound quality is superb and would pass for soundboard however, the audience noise between songs does suggest that the recording includes audience based microphones. Whatever the case this captures a really incredible gig with the inclusion of some remarkable songs from Neil Young's musical career. In recent years Neil Young's work rate has not diminished as the following from All Music reminds us - In early 2005, Young was diagnosed with a potentially deadly brain aneurysm. Undergoing treatment didn't slow him down, however, as he continued to write and record his next project. The acoustically based Prairie Wind appeared in the fall, with the concert film Heart of Gold, based around the album
3 comments
Read more
More posts