Simone - everything/nothing. New York’s Simone is revealing the 3rd song “everything/nothing” from her upcoming pure pop love lessons EP which will come out this summer. At 16, after releasing her first alt-pop track "Kissing Strangers" earlier this year and she revealed “Boy Of My Dreams”. Simone writes with a cinematic eye here, capturing the rough edges of modern relationships in vivid detail. Simone explains the song: “everything/nothing” tells a story about a young love from its beginning to its end. In the chorus, I play with the clichés of teen romance by contrasting them with the anxiety and pain that comes along with it. On the surface, the song is a classic love story, but there are a lot of underlying messages about the pressure and confusion that comes with being a teenager.” At 10 years old, her worldview opened up to become a performer when she sang 2 self-written songs at an open mic in Nashville, TN. Needless to say that from an early age, New York-based Simon
Post a Comment
Read more 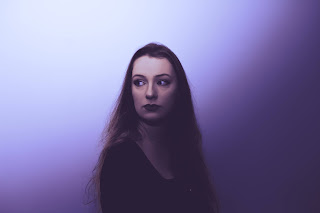 Freyja Elsy - Lungs. The debut single Lungs from Freyja Elsy is an epic, yet introspective look at the end of a relationship. Freyja Elsy is an independent singer songwriter and composer with a nomadic past and a sound that pushes into the future. Creating songs with a keen ear whilst pursuing music education, she found herself within the vibrant, engaging Cardiff scene. Through both outside musical influence and internal personal conflict she started to establish a clear identity, forging a path forward to create &lsquo;Lungs&rsquo;, her first single. Based around very real, very intimate voice recordings, &lsquo;Lungs&rsquo; starts small and reserved, fragile in its form and structure. The track slowly unfolds and develops into rising crescendos alongside uncompromising percussion. A mixture of glitchy synthesisers and rising strings interweave around Elsy&rsquo;s voice, which sits unwavering and steadfast. Her bold lyrics are strong in the face of a contrasting
Post a Comment
Read more 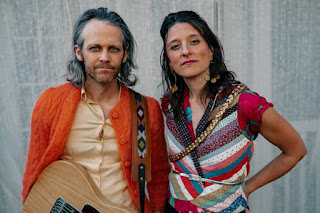 David Wax Museum - Sir Orfeo. The new David Wax Museum E.P is on it's way! As always this folk group with strong Mexican music influences continues to push boundaries following their NPR Tiny Desk, Newport Folk Fest, and CBS Saturday Morning appearances. The indie-folk/dream-pop artist is putting out an EP on June 25. It’s the alter ego of Turners Falls, MA musician Max Wareham and the pastoral western Massachusetts hills are definitely palpable in his music.  He’s been influenced by magical realistic and adjacent books like Killing Comendatore by Haruki Murakami, as well as The Rings of Saturn by W.G. Sebald and his music has a quality of wonder balancing with a sort of ambient beauty, part of which comes from the fact that it was largely recorded on cassette. =================================================== Atomic Bronco - Cruel. Atomic Bronco have released their first new music of 2021, dropping new single Cruel today. The punchy, lo-fi indie rock tune is the first song off
Post a Comment
Read more 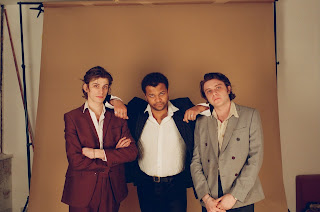 Sunglasses For Jaws - What Does It Look Like. London based outfit Sunglasses For Jaws today release their new single "What Does It Look Like" - the third track to be shared from upcoming album Everybody's Made Of Bones, out June 3rd via Pony Recordings. Widescreen, psych-rock with a penchant for the dramatic, David Bardon and Oscar Robertson along with recently recruited vocalist Oliver Huband recorded Everybody's Made Of Bones at Sean Ono Lennon's studio in upstate New York. Produced by Lennon's partner Charlotte Kemp Muhl and mixed by Elliot Heinrich (Temples, Sorry, Parquet Courts) - the album examines the story and struggles of Huband's character 'Frank', with Huband's hushed singing and spoken word narratives impeccably delivered across the sprawling, kaleidoscopic instrumentals. A cacophony of horns, driving guitars and lilting xylophone runs, new single "What Does It Look Like" provides a cinematic insight into the band's
Post a Comment
Read more

Fresh - My Redemption Arc. London DIY punks FRESH today share brand new track ‘My Redemption Arc’ and announce new five track EP ‘The Summer I Got Good at Guitar, out April 30th on Specialist Subject Records. FRESH have worked tirelessly since their inception – touring with the likes of The Beths, PUP, Adult Mom and more, releasing two albums and amassing a devoted fanbase following appearances at Fest, Manchester Punk Festival and The Fest in Madrid amongst others. For a band that have existed for a relatively short period of time, the four-piece have already released a hefty catalogue of work – prolific, ever evolving and always fresh (in every sense of the word). The UK punk scene continues to suffer at the hands of Covid-19 and following a year of no live shows, ‘The Summer I Got Good at Guitar’ is here to remind us not only of what we’re missing but of what we’ve got to look forward to when FRESH can finally tour again. My Redemption Arc’ and EP closer ‘Cry For Help’ were written
Post a Comment
Read more 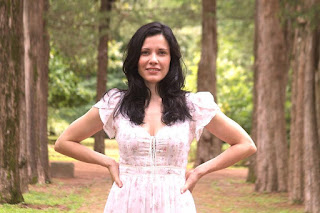 Shannon McNally - I've Always Been Crazy. “I have always loved his defiantly existential but immediately accessible common man’s music and how it boogies,” says Shannon McNally of the man whose timeless music is the subject of her new album The Waylon Sessions, Waylon Jennings. Upon the album’s completion, McNally’s collection of tunes ended up being not so much a tribute as it is a recontextualization; a nuanced, feminine rendering of a catalog long considered a bastion of hetero-masculinity. “The world has changed a lot since these songs were first recorded,” says McNally. “I have never heard a woman sing any of them, but these tunes are poignant and relevant to me and to women in general right now.”   With The Waylon Sessions, McNally set out to revisit the songs and spirit of Waylon Jennings, a legend with whom she’s always had an ongoing fascination. Over and over again, she manages to locate a smoldering intensity, a searing hurt buried deep within the music’s deceptively si
Post a Comment
Read more
More posts