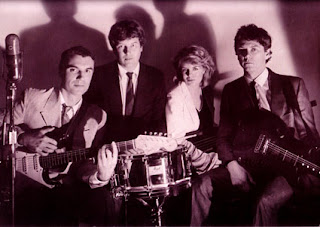 This is Talking Heads live at The Stardust Room, Las Vegas, NV in the USA way back on the 29th September 1979. David Byrne, Chris Frantz and Tina Weymouth were 'alumni' of the Rhode Island School of Design in Providence, Rhode Island. There David Byrne and Chris Frantz formed a band called "The Artistics" in 1974. Tina Weymouth was Chris Frantz's girlfriend and often provided the band with transportation. The Artistics dissolved within a year, and the three moved to New York, eventually sharing an apartment. Unable to find a bass player in New York City, Chris Frantz decided to encourage Tina Weymouth to learn to play bass. They played their first gig as "Talking Heads" opening for the Ramones at CBGB on June 8, 1975. In a later interview, Tina Weymouth recalled how the group chose the name Talking Heads: "A friend had found the name in the TV Guide , which explained the term used by TV studios to describe a head-and-shoulder shot of a pers
2 comments
Read more
More posts