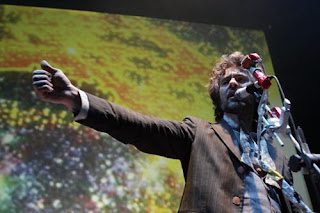 The Flaming Lips formed back in Oklahoma City, Oklahoma, USA in 1983, and have enjoyed varying degrees of critical, and popular success down the years, perhaps this past decade has been the best one for them.

This recording gives those yet to see them live an audio taster, however there is no substitute for the real thing so 'catch them if you can'. If you are new to the band check them out, fans either have a copy of this, or will love it!

This then is The Flaming Lips live on the 2nd May 2006, at Cirkus, Stockholm, Sweden.

Comments: Someone else wrote this over on Wiki: 'The band is known for their lush, multi-layered, psychedelic arrangements, spacey lyrics and bizarre song and album titles (for example, "Psychiatric Explorations of the Fetus with Needles", "Free Radicals (A Hallucination of the Christmas Skeleton Pleading with a Suicide Bomber)" and "Yeah, I Know It's a Drag... But Wastin' Pigs Is Still Radical"). They are also acclaimed for their elaborate live shows, which feature costumes, balloons, puppets, video projections, complex stage light configurations, giant hands, large amounts of confetti, and front man Wayne Coyne's signature man-sized plastic bubble, in which he traverses the audience. In 2002, Q magazine named The Flaming Lips one of the "50 Bands to See Before You Die".

Sums them up nicely, and make this post easier for me!

Anonymous said…
certainly agree on all the comments re their live show - have seen them 5 times and Coyne just as inventive as when i first saw them - the live dvd "UFOs at the Zoo" is a good document of their live act but there is no substitute for the full on experience...