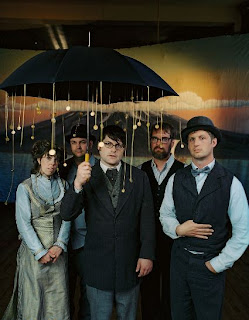 This is The Decemberists live in concert at the Tower Theater, Upper Darby, PA, USA, back on March 27th, 2007 plus broadcast on WXPN FM and for lovers of detail recorded via a  Kenwood 104AR Receiver . If it was not for the eruption of independent music blogs around a decade ago, I often wonder if I would have found out about bands such as The Decemberists. Their name kept on 'coming up', I checked them out and as the saying goes "the rest was history". Great band and this is a fine concert recording. From Wikipedia - The Decemberists are an indie folk rock band from Portland, Oregon, United States, fronted by singer/songwriter Colin Meloy. The other members of the band are Chris Funk (guitar, multi-instrumentalist), Jenny Conlee (hammond organ, accordion, melodica, piano, keyboards, harmonica), Nate Query (bass guitar, string bass), and John Moen (drums, backing vocals, melodica, guitar). The band's debut EP, 5 Songs, was self-released in 2001. Their sixth
1 comment
Read more
More posts