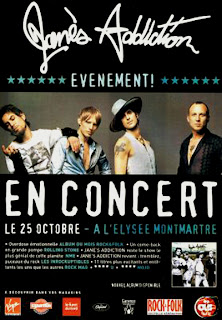 This is Jane's Addiction performing live at Elysée Montmartre, Paris, France back on the 25th October 2003.  The concert was broadcast by the French radio "OUI FM", the concert was in support of their "Strays" album release.

Jane's Addiction is an American alternative rock band formed in Los Angeles, California in 1985. The band's original line-up featured Perry Farrell (vocals), Dave Navarro (guitar), Eric Avery (bass) and Stephen Perkins (drums). After breaking up in 1991, Jane's Addiction briefly reunited in 1997 and again in 2001, both times with Avery declining to participate. In 2008, the band's "classic" line-up, featuring Avery, reunited and embarked on a world tour. Avery subsequently left the band in early 2010 as the group began work on new material. To date, they have released four studio albums.

Strays was the third studio album by Jane's Addiction, released on July 22, 2003 on Capitol Records, and the first album to be recorded by a reunited Jane's Addiction. Released 13 years after Ritual de lo Habitual (1990), the album marks the band's longest gap between studio albums, and is the first to feature bassist Chris Chaney. Regarding the decision to record a new studio album after 13 years, drummer Stephen Perkins stated that the band had already completed two reunion tours performing old material, and that Jane's was ready for "a new challenge." Vocalist Perry Farrell states that the band "went into the studio thinking fast, hard, modern and to the point."

Upon its first week of release, the album sold 110,500 copies in the United States and is currently certified Gold. In the UK, the album is certified Silver, having sold over 60,000 copies. The single, "Just Because", was nominated for a Grammy Award in 2004.

The album received generally positive reviews, with a Metacritic score of 75, based on 19 reviews. Playlouder noted that "their glee and enthusiasm can be heard coursing through every bar.", while NME claimed that Strays was "one of the best rock albums of 2003." and Alternative Press stated that the album was "better than anyone could have predicted.

Five tracks from the album are included in this concert.