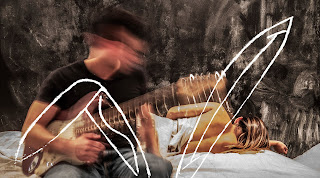 HARE - Rolls Along. Background - HARE is the project of New Jersey based songwriter and musician Sebastien Isaac, accompanied by drummer Michael Santa Cruz, keyboardist Jon Caplan, and guitarists James Licata and Graham Orbe. After honing his songwriting during his time in college, Isaac returned to NJ and began showcasing at open mics around the tri-state area.  He soon began collaborating with Santa Cruz, Caplan, Licata and Orbe, developing a new unified sound, and set his sights on breaking into the New York City music scene. Seb, admittedly, doesn't have all the answers. The NYC based pop-rock artist understands that his journey, up till now, has all the benchmarks of many millennial coming-of-age stories: a passion placed on the back burner, pursuing a pricey degree, accumulation of debt, a transitional period of stasis, and, finally, lifting the passion off the back burner in spite of all the raised eyebrows.  He knows that happiness may just be a fool’s errand, but
Post a Comment
Read more 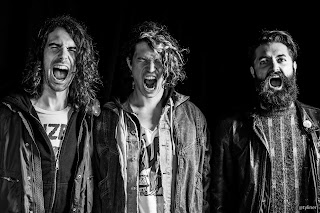 Vamos - Outsiders. Background - After a nearly three-year wait, Chicago garage punks Vamos are about to drop their sophomore LP, 1~2~3, via Maximum Pelt, a Windy City-based, small batch cassette and record label that specializes in punk, garage, psych, noise and experimental music. Vamos (Ryan Murphy-guitar/vocals, Will Wood-bass, Josh Lambert-drums) formed during Chicago’s epic blizzard of 2011 and began playing the city’s thriving DIY scene, quickly garnering the attention of local blogs, including Chicagoist, who described the trio as having “a potent and turbulent energy both live and in their recorded material.” On the live front, Vamos graduated from playing shows at local underground venues, including Wally World and Animal Kingdom, to touring nationally, with show and festival appearances on both coasts, in Austin, Texas during SXSW and in their hometown for Riot Fest. Vamos released the Heatwave EP in spring of 2013 and followed up quickly that winter with the EP Midwaste
1 comment
Read more 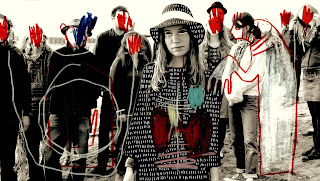 Gris-de-Lin - Muhammad Ali. Background - Gris about the song: "Inspired by a true story – a patient escaped from a local hospital and broke into my old flat overnight, leaving behind a pile of clothes and a nametag that read ‘Muhammad Ali’. This got me thinking about incarceration, whether physical or mental, and the idea that ‘whatever you do to me I will still have freedom of thought’." Gris-de-Lin is a singer/songwriter and multi-instrumentalist from Dorset. Her music is a heady mix of post-rock, blues and alt-folk peppered with warped electronics. Her debut album, Sprung, comes out on BB*Island in April 2018. The album was recorded in a nursery school and saw her playing virtually all of the instruments herself — from guitars and synths to drums and saxophone. Working with producer/engineer Chris Hamilton (Torres/Kite Base), she also drafted in Rob Ellis (PJ Harvey/Anna Calvi) to play drums on several tracks. Alongside her solo projects, Gris-de-Lin has worked with a
Post a Comment
Read more 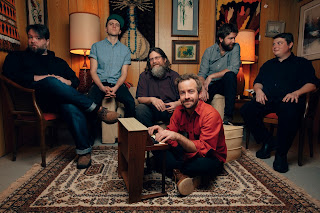 Trampled By Turtles - The Middle. Background - The much-adored Minnesota sextet, Trampled By Turtles have shared their new single, ‘The Middle’, the second to be taken from their forthcoming album Life Is Good On The Open Road, due for release via Thirty Tigers on June 1, 2018 - you can listen to the new single here. After an indefinite hiatus, the band are returning with their first new album in four years following in the wake of previous Billboard-charting records which have included three No.1s on the Bluegrass and Folk charts. Life Is Good On The Open Road is the welcome return that the group’s legions of passionate fans have been waiting for. Led by the songwriting of lead singer Dave Simonett, the new songs touch on key elements from the entire spectrum of Trampled By Turtles’ body of work, while creating something that sounds fresh and invigorated. Simonett, and bandmates Erik Berry, Ryan Young, Dave Carroll, Tim Saxhaug and Eamonn McLain reunited at a cabin in the Minneso
Post a Comment
Read more
More posts