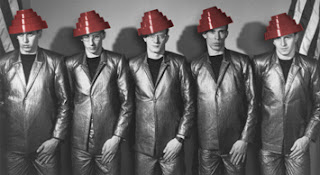 The Devo credentials 'are all there'. The pivotal moment for the formation of Devo was the first hand witnessing by one of the bands founders Gerald Casale of the Kent State University shootings of May 4, 1970. The first form of Devo was the 'Sextet Devo' which performed at the 1973 Kent State performing arts festival. They are 'discovered' by David Bowie and Iggy Pop in 1976, and subsequently record ' Q: Are We Not Men? A: We Are Devo! ' which was produced by Brian Eno . They are referenced as 'punk', 'new wave', 'post punk', 'art rock', and into the 1980's as the acceptable face of 'synth pop'. That's not a bad selection of street credibility references in any ones books is it? There is so much to Devo, that I am going to take the easy way out, and provide a link HERE to wikipedia. Actually I have read through it and learned a lot more, and of course been reminded of the fantastic visual
10 comments
Read more 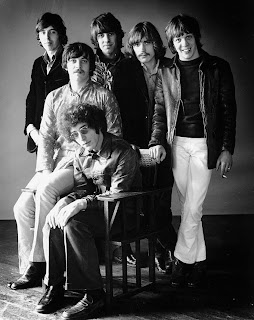 First of all the radio bit. WPLJ became in late 1970, a '100% live free form' rock format station. By September 1971 they had developed into the very first AOR (adult orientated rock) station in the USA. The station would play the music of artists such as Led Zeppelin, The Beatles, Aerosmith, Jimi Hendrix, Cream, The Doobie Brothers, Steely Dan, Deep Purple, Rod Stewart, and The Allman Brothers. The station would also play more 'popular' songs from artists such as James Taylor, Stevie Wonder, Elton John and Carly Simon. All in all, and compared to the ' AOR format' in later years, at least the music was new or relatively new back then, and throughout the 1970's WPLJ was one of the most successful stations on the planet! Procol Harum sat comfortably in WPLJ's 'free form' rock format, back in April 1971. Having moved on from the psychedelic pop music phase that was 1967's 'A Whiter Shade of Pale', Procol Harum were a well re
7 comments
Read more The controversy of it all! 1965, the year Bob Dylan 'went electric' . Looking back now, it all seems so quaint. Fans outraged that Bob Dylan had sold out, abandoning his folk roots, and daring to perform with a band, and not only that, some of them had 'electric guitars'. It all began at the Newport Folk Festival in July of that year, with the crowd apparently 'booing' as he performed three songs with what was then most of The Paul Butterfield Band . The legend of going electric (with the famously recorded heckle of 'Judas' the following year in Manchester - England), is of course in the scheme of things pretty unimportant, but way back then the folkies were clearly a serious bunch, not open much to their icons doing the unthinkable. Mind you it did not do Bob's record sales any harm, and can you imagine 'Desire' or 'Blood On The Tracks' as wholly acoustic affairs? After the Newport festival and in support of the
8 comments
Read more
More posts