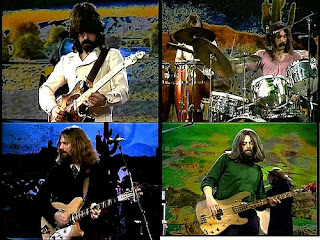 The Byrds have been credited with forging the link between the musical style's of Bob Dylan and The Beatles back in the 1960's.

They can also claim to be one of the pioneers of folk rock and country rock, whilst retaining a pedigree in the sixties psychedelia scene.

In 1969 they performed at the Fillmore West, the concert subsequently being released as an official album, and receiving good reviews and sales.

The following year (1970) the Byrds were touring and promoting that years 'Untitled' double album, (with the second half again being live).

During the tour the band were legitimately recorded in Holland by Dutch radio organisation VPRO.

This concert had a notably different set list than the Fillmore West concert.

This then is The Byrds, Live Concertgebouw, Amsterdam (Holland) on July 7th, 1970.

This is a pristine copy from the broadcast on the Dutch Radio 2 on August 10, 2006 by KRO, as direct from the original master tape - lets just say top quality.

chipper said…
Thanks for your share on this one- I used to think that this was my least favorite version of the band, but over the past few years, its the one that I visit most often. The guitar interplay is very under-rated...
16 December 2007 at 02:51

Anonymous said…
I always check the Beehive for great concerts. Thanks
16 December 2007 at 05:00

Anonymous said…
I was there in 1970 when they played in Nijmegen, Holland. I think that it was some months after that concert that the guitarplayer Clarence White died in a caraccident.

Unknown said…
Younger Than Yesterday is still my favourite but Untitled is pretty cool too because it has Chestnut Mare on it. Thanks for this!
16 December 2007 at 21:59

zico said…
A flying performance from a great band. Thank's again and again.
This Byrds are made for rocking and what they do.
We have to listen to them and the rest is one nice history of delight.
Giannis
17 December 2007 at 10:49

Anonymous said…
Thanks Mike. Looking forward to seeing if Willing is the same song Little Feat wrote. Martin from Canada.
21 December 2007 at 23:26