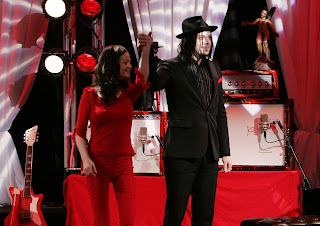 I hate the expression 'back to basics'.

Yet The White Stripes even when enlisting the bag pipes as part of their sound, have such a raw primal energy, they takes rock'n'roll music 'back to b...

This is The White Stripes earlier in 2007, performing live for BBC Radio One, in front of an audience of very fortunate fans.

Unfortunately there is a little bit of Radio One 'speak' early on, however once the band get going, its all good stuff.

The performance was at the Maida Vale Studios, Maida Vale, London, and originally broadcast live on the 13th June 2007.

This is a very high quality recording of the show - fully mixed stereo soundboard, with digital post production.