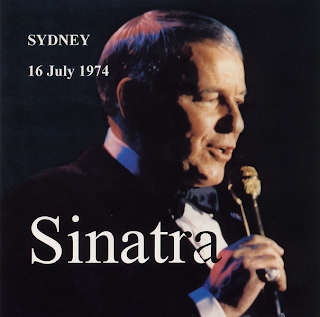 This is Frank Sinatra performing live in concert on the 16th July 1974, in Sydney Australia. Frank caused something of a stir on this tour (see comments). This was a busy year for him, he returned to to Las Vegas, performing at Caesars Palace in January, and then after the Australian tour, he appeared at New York City's Madison Square Garden in a televised concert that was later released as an album under the title The Main Event – Live . He then went on to tour in Europe. Source: FM Stereo Sound Quality: Good stereo MP3@160kbps Genre: Traditional Pop, Jazz, Big Band Vocals. Set: Full concert performance. Set List: 1. I Get A kick Out Of You 2. You Are The Sunshine Of My Life 3. Let Me Try Again 4. If 5. Bad Bad Leroy Brown 6. Angel Eyes 7. I've Got You Under My Skin 8. My Kind Of Town 9. Send In The Clowns 10. Nancy 11. The Lady Is A Tramp 12. My Way Links: Official site HERE . Comments: It was during this tour that Frank Sinatra caused an u
8 comments
Read more
More posts