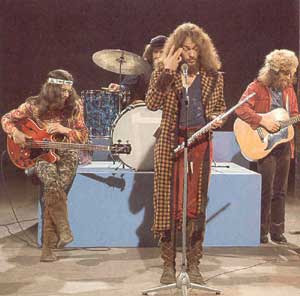 This is Jethro Tull live in concert at Konserthuset, Stockholm, Sweden, on January 9th 1969.

At this time the band were only around a year old and had not long parted with Mick Abrahams who was replaced by Martin Barre.

The change of line up was over musical direction, with Ian Anderson keen on developing the overall band sound and direction, rather than just a blues focus.

That said the blues legacy is notable here and the songs quite different to the more definitive styles that would emerge in the coming years.

This was just prior the the bands debut tour of the USA, on this occasion they were on the same bill as Jimi Hendrix.

Comments: The band released their debut album 'This Was' in the summer of 1968 which hit Number 10 in the British charts, partly thanks to great airplay from BBC Radio DJ John Peel.

This new line-up released Stand Up later in 1969, the group's only UK number-one album. Written entirely by Anderson — with the exception of the jazzy rearrangement of J. S. Bach's Bourée it branched out further from the blues, clearly evidencing a new direction for the group.

With that in mind this concert recording catches the band on the cusp of change, and is a great document of the bands early stage sound.

Freg said…
This is magnificent!

It reminds me why i love Jethro Tull.