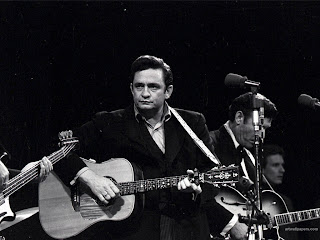 By the early 1970s, Johnny Cash had established his public image as 'The Man in Black' . He regularly performed dressed all in black, wearing a long black knee-length coat. This outfit stood in contrast to the costumes worn by most of the major country acts in his day, that is rhinestone suit and cowboy boots . In 1971, Cash wrote the song 'Man in Black' to help explain his dress code, "We're doing mighty fine I do suppose/In our streak of lightning cars and fancy clothes/But just so we're reminded of the ones who are held back/Up front there ought to be a man in black." He and his band had initially worn black shirts because that was the only matching color they had among their various outfits, and he claimed to like wearing black both on and off stage. From the 'Man in Black' era this is Johnny Cash live at The Nieuwe RAI, Amsterdam, Holland, on the 26th February 1972. Set list is: 1. I Walk the Line intro / A boy Named Sue. 2. Ram
4 comments
Read more 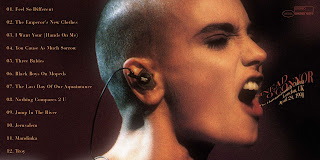 Known as 'Beautiful Vision' , this is Sinead O'Connor live at the Hammersmith Odeon, London, on April 24th, 1990. Its twenty one years since her debut album 'The Lion and The Cobra' was released. This concert was from around the time of her second album ' I Do Not Want What I Haven't Got' and just prior to ' Nothing Compares 2 U' being an international hit single. With songs from both albums the set list for this concert was: 1. Feel So Different 2. The Emperor's New Clothes 3. I Want Your (Hands On Me) 4. You Cause So Much Sorrow 5. Three Babies 6. Black Boys On Mopeds 7. Last Day Of Our Acquaintance 8. Nothing Compares 2 U 9. Jump In The River 10. Jerusalem 11. Mandinka 12. Troy Sound quality is very good stereo soundboard @ 192kbps. DOWNLOAD LINK IS IN COMMENTS BELOW. For more on Sinead O'Connor check out her web site HERE , and MySpace HERE . A selection of her Cd's can be found HERE at the Beehive Candy Store.
4 comments
Read more
More posts