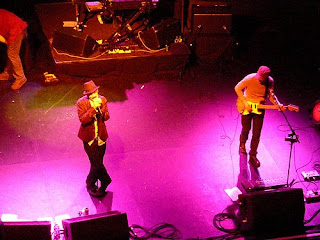 James have just released the superb new album 'Hey Ma', more about that in the next round up of all things new 'whats up doc'.

Part of the whole Factory records and 'Madchester' scene, by the early 1990's the band had achieved much deserved success, releasing some excellent albums and singles along the way.

This concert was recorded by Radio One in the UK and was also syndicated to the Westwood One network in the US.

Recorded at the Brixton Academy on the 9th December 1993, this show has James touring their landmark 'Laid' album from which most of this set comes.

Originally broadcast in the UK three days later the recording set list is as follows:

The sound quality is superb, their performance is wonderful.

You can check out James in the Beehive Candy Store HERE.

Beehive Candy said…
COPY AND PASTE THE LINKS AS USUAL...