Orchestral Manoeuvres in the Dark - Holland 1980 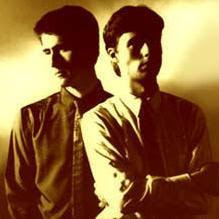 This is Orchestral Manoeuvres in the Dark (OMD) live in concert back on the 12th December 1980 at Rijswijk in Holland. The bands first album released in 1980 showcased the band's live set at the time, and was basically recorded by the Paul Humphreys & Andy McCluskey duo, although included some guest drums from Id drummer Mal Holmes, and saxophone from fellow Wirral (Merseyside) musician Martin Cooper. DinDisc arranged for the song "Messages" to be re-recorded (produced by Gong bassist Mike Howlett) and released as a single and this gave the band their first hit. Dave Hughes a founder member of Dalek I Love You who joined OMD in early 1980 featured in the "Messages" video. Source: Soundboard (pre AM broadcast). Sound Quality: Very good stereo mp3@320kbps Genre: New Wave, Synth Pop. Set: Full set. Set List: 1. Pretending to see the future 2. Almost 3. Messages 4. The more I see you 5. Statues 6. Red frame white light 7. Electricity 8. Bunker sold
2 comments
Read more

It's not only my opinion that Rubblebucket are one outstanding band, Seven Days Vermont named them best band of 2008, and others have equally applauded their excellent music and live performances. Their second album (following up on last years debut 'Rose Dream') is simply titled Rubblebucket, and cutting straight to the point I absolutely love it. This is one summary of the band that helps lift the lid off Rubblebucket: Defined as a polyrhythmic dance/rock band, Rubblebucket is a nine-piece group that combines the sounds of various brass instruments with catchy rhythms and soulful lead vocals. The resulting sound has hints of dance, rock, and funk, and is anything but ordinary. The unique music that this youthful, energetic group has managed to produce is universally appealing, as it defies genre boundaries and combines true musical talent with a spirited, positive attitude. Led by trumpeter Alex Toth and with the incredible vocals of Kalmia Traver their MySpace site
Post a Comment
Read more 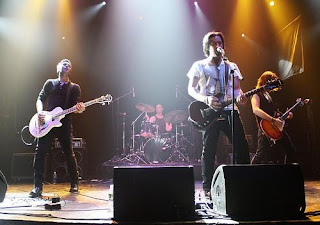 Introducing Brooklyn's (yep Brooklyn again , have they nicked all the new band fairy dust) Fugitive Soul who only formed in May of this year! Well if you are regular to this site you know I kinda like a little bit of indie pop and rock, so I guess it's fair to say the these guys were in with chance from the start. That said there is an awful lot of 'stuff' out there so you still need to stand out, and the fresh breezy and vigorous sound of their new 'Strangers' EP does just that for me. They have a few live dates right about now, so if you can check them out I am told they are well worth the effort. Tour Dates: Oct. 12 th – New York, NY @ Webster Hall’s The Studio Oct. 19 th – New York, NY @ Webster Hall’s The Studio Oct. 21 st – Brooklyn, NY @ Union Pool w/ Cale Parks, Lemonade, Little Girls and Takka Takka Listen: 'Frames' Website: MySpace HERE . Official HERE . Buy: Checkout their sites for details in due course. Plenty more to lis
Post a Comment
Read more

Japan were a British group, who originally formed in 1974 in Lewisham, South London. The band achieved success in the late 1970's and early 1980s, when they were often associated with the burgeoning New Romantic fashion movement (though the band themselves have downplayed any such connection). Japan's last ever performance was on 16th December 1982 in Nagoya, Japan, this was just five days earlier on the 8th December 1982 at Budokan Hall, Tokyo, Japan. The band decided to split just as they were beginning to obtain long-overdue commercial success both in their native UK and internationally, with Oil On Canvas becoming their highest charting British album, reaching number 5. Both Hansa-Ariola and Virgin Records continued to release Japan singles into 1983. Source: Soundboard & FM. Sound Quality: Very good stereo mp3@320kbps Genre: New wave, post punk, synth pop. Set: Full set. Set List: 01. Burning Bridges 02. Sons Of Pioneers 03. Alien 04. Gentleme
7 comments
Read more 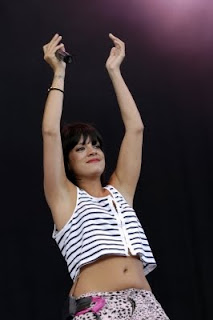 This is Lily Allen during the summer performing live at the Hurricane Festival, Eichenring; Scheessel, Germany back on the 21st June 2009. Despite all the media hype, tabloid press nonsense, and record company issues, Lily remains a very talented artist and live performer. I was surprised at how much 'stuff' has been written about her, however the wiki entry on her seems to be quite factual rather than a shrine for fans, and gives a reasonably good background. For me it's the music that counts and with some very very talented musicians this is one great concert performance. Source: FM Radio Broadcast (Germany). Sound Quality: Very good stereo mp3@256kbps Genre: Pop, Pop Rock, Ska, Electro Pop. Set: Full set. Set List: 01 – Everyone’s At It 02 – I Could Say 03 – Oh My God 04 – LDN 05 – Back To The Start 06 – He Wasn’t There 07 – Littlest Things 08 – 22 09 – Smile 10 – The Fear 11 – Womanizer 12 – F You 13 – Not Fair Links: Official Site HERE . Wikipedia HERE
9 comments
Read more
More posts