Showing posts from November 7, 2021
Show All 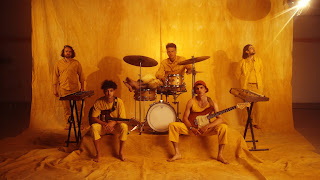 Photo - Alfred Thirolle Cousin Kula - Something So Sweet. Bristol's Cousin Kula today release their new single "Something So Sweet", the final taster of their debut album Double Dinners, out November 26th via Rhythm Section. With co-signs from the likes of BADBADNOTGOOD, Cousin Kula's forthcoming debut album Double Dinners follows their 2017 EP 'OODLES', 2019's 'STROODLES' EP, along with their 2020 'Casa Kula Cassette', which caught the attention of beloved tastemaker and DJ Bradley Zero who swiftly signed them to his Rhythm Section label. New single "Something So Sweet" is a prime example of the band's undeniable ability to blur the lines between sweeping psychedelia and blissful jazz. Arguably the best showcase of Joe Milkinson's jazz drumming prowess, the track is wonderfully interspersed with stunning saxophone turns, intricate guitar passages and electrifying synths. Speaking on the new single release the band said: &
Post a Comment
Read more 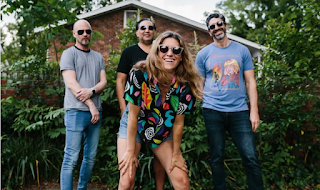 The Jaws of Brooklyn - Fever. Seattle-based band, The Jaws of Brooklyn, announce the release of the 60s influenced Garage Soul Pop single on November 12. It’s off the album, The Shoals, due out in early 2022. Lyrically the song represents embracing every facet of being a woman – especially anger, and being unabashedly unapologetic in showing up fully in every expression of emotion, despite how “unattractive” or unacceptable it might be to society. The Jaws of Brooklyn fully express these emotions on “Fever” with a sensual, gritty determination. Lead singer Lindsay Love, says “It touches on being someone’s desire but never their ‘dear.’ It’s about pulling the tape off my mouth to finally speak up and get loud without caring how I’m perceived. It also touches on female sexuality from a purely physical stance that dispels the historical notion that women are always seeking something more from men.” The band recorded the single in The Shoals region of Alabama at Sundrop Sound, the studio
Post a Comment
Read more

Dana Gavanski - Letting Go. Following on from her debut album Yesterday Is Gone and her covers EP Wind Songs both released in 2020, Serbian-Canadian musician Dana Gavanski gives us a taste of what's to come next with her brand new single "Letting Go." It's a slice of wide screen psychedelic pop. Dana and her band are also heading out on the road with Porridge Radio this week, a tour they will be embarking on by train in the interest of lowering their environmental impact. Of the new single Dana says: "It's like a little mantra for me to sing, though maybe it’s a tad unconventional being that it’s not necessarily the kind of positive message we all associate with pop mantras. It’s more of an account of how the mind works to undermine us. It’s a subverted mantra. In the chord sequence I was trying to excite my ears and explore different melodies." ========================================================================== Kaya Usher - Heart Clicks. Kaya U
Post a Comment
Read more 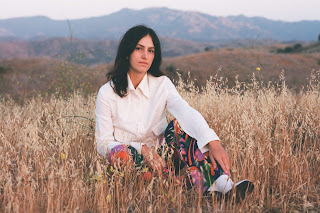 Photo - Morgan Hamilton Alyssa Gengos - Gothenburg English. Alyssa is a multi-talented producer who's been making records auteur-style on her laptop for years ("I feel most comfortable when I'm completely alone" she says in the bio below). Her music is straight forward in style, but elegant in construction and form. Here's what Alyssa had to say about the meaning behind the song and the video: I began writing “Gothenburg English” in my head while walking around the titular city near the end of my Scandinavian sojourn. Six months prior, I’d left a long term partner behind in New York City, hoping the relationship would survive. It did not. I finally accepted the end of it while wandering around Gothenburg and the Delsjö wilderness on the outskirts of the city. A friend told me the local accent is one of the most sing-songy in the Swedish language, and it’s audible when speaking English, too, creating a kind of “Gothenburg English.” I think of this song as a road s
1 comment
Read more 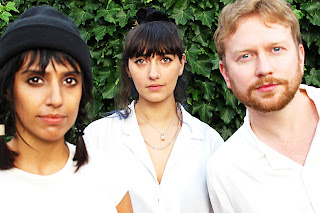 KIN - The Runaways. Ambient indie pop band KIN return with their most ambitious single yet, The Runaways. Following the success of their first three singles, which have been collectively streamed over 310,000k times on Spotify, their new track, unleashed last Friday, is a pulsating pop anthem with dreamy guitar riffs, beautiful melodies, and mesmerising beats. The song is produced by Josh Tyrrell (Lana Del Rey, Mark Ronson, Tony Visconti) and released with 3tone Music.  The band is formed of Grace (performance maker and model), Ritu (lead in the Netflix series The Umbrella Academy and star in the film Red Notice alongside Ryan Reynolds, Gal Gadot and Dwayne Johnson) and Adam (last seen on stage at the National Theatre). Their music blends electronic keys and catchy guitar riffs to produce a sound that is unique, dynamic, and constantly evolving. Influences include indie powerhouses such as The XX, Warpaint, Still Corners and Foals as well as female-fronted bands like Chromatics, Coctea
Post a Comment
Read more

James - Miss America (Library Session). James are pleased to announce the release of The Campfire EP, available on November 19, 2021. Filmed at Broughton Hall in the UK’s Yorkshire Dales earlier this year, the EP features uniquely intimate versions of three tracks from James’ latest album, All The Colours Of You along with the added bonus of their classic “Just Like Fred Astaire,” taken from their 1999 record, Millionaires. The Campfire EP will be exclusively available on the James store and at the merchandise store on their forthcoming tour. The release will be limited edition, numbered and include a QR code to download the Campfire videos. Tim Booth says “The beginning of the new James 9 piece began at Broughton Hall. The sessions there felt magical. Here is a slice of the magic that we created around a campfire one evening...” James will perform tracks from the new record and many more from their rich catalogue on the forthcoming arena tour with special guests Happy Mondays. ======
Post a Comment
Read more
More posts