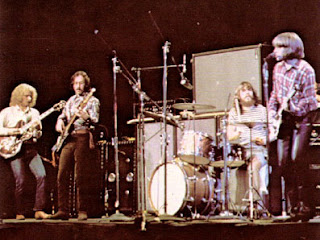 This is Creedence Clearwater Revival live on the closing night of the Fillmore West in San Francisco, way back in 1971.

Ironically the band were starting to fall apart at this time, following an intense period of recording and touring that had lasted since the late 1960's, during which they achieved considerable critical acclaim, along with a number of highly successful albums.

Recognising the milestone that was the Fillmore West closing, the band performed a concert that was relevant, and a must for any fan of the band, or the era.

This then is Creedence Clearwater Revival at the Fillmore West closing night, San Francisco, California, USA, on July 4th 1971.

The set list includes the source for the concert KSAN FM, possibly the most appreciated alternative radio source in the USA at that time.

The source of this recording is KSAN, however some owners of this boot, have commented that the quality is so good, it could be pre FM soundboard.

Some minor editing and remixing has been undertaken on this using pro tools.

Anonymous said…
Thank you Beehive Candy for this excellent CCR recording..you have some really cool stuff on your blog so i'll be stopping by daily, if you don't mind!! Thanx for sharing. "Q"
16 November 2007 at 04:01

Anonymous said…
Heloo!
Great contribution!
The link to the first part of the show does not seem to work anymore.
Could you please check?
Part 2 dowloaded just fine.

Beehive Candy said…
COPY AND PASTE THE LINK TO YOUR WEB BROWSER:

bd said…
Howdy....is it gonna be possible to get a repost to another file site? As mega is gone. Sure would love to hear some live CCR from the Fillmore. Thanks.
25 February 2012 at 15:18