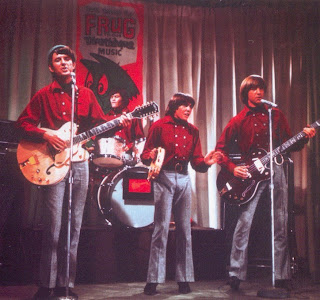 In the early days of The Monkees, there was some fuss over the fact that session musicians played on their first couple of albums.

Add to this the fact that they had been brought together for a TV series, any thought of artistic integrity or status was a definite no.

However they were fun, their fan base included The Beatles, and repeats of the TV series, still appear time and again on cable and satellite channels.

However by 1968 the TV series was over, the band completed a far east tour, the last with Peter Tork as part of the band at that juncture, and their very alternative and psychedelic film 'Head' was released.

This is from the 'far east' tour, and captures a band that at least live, probably still had something to prove.

You can also enjoy a couple of 'hot rocking' Japanese DJ's whose voice overs, bring a huge smile to my face, somehow I think this was pretty serious stuff for them.

Clearly from a radio broadcast of the show - FM thankfully - but remember this was 1968, so don't expect audio heaven, that said it is highly listenable, after the initial intros.

This boot is apparently called 'Made In Japan - 1968' and the actual concert was at the Budokan Hall, Tokyo, Japan, on the 4th October 1968.

Anonymous said…
You have to give them credit for showing everyone they were more than just a bunch of actors. They had tall boots to fill by going out on their own, writing and performing their own material.

Anonymous said…
ACTUALLY, THE MONKEES LIVE IN JAPAN 1968 RECORDING CIRCULATING AROUND WAS TAKEN FROM A "VIDEO" RECODING OF THE BAND'S LAST TOUR TOGETHER UNTIL THEIR LATE 90s BRITISH REUNION TOUR. THE CONCERT IN JAPAN WAS RECORDED BY JAPANESE TV IN COLOR AND WAS BROADCAST AS A DOCUMENTARY THAT INCLUDED NARRATION. IT WAS NOT FROM A RADIO BROADCAST.

THE ORIGINAL VIDEO HAS BEEN ASSUMED LOST AND ONLY THE AUDIO SURVIVES. IRONICALLY, JAPANESE TV RECORDED THE BEATLES IN 1966 DURING THEIR FINAL EVER TOUR.

Anonymous said…
Thanks! Andrew Sandoval's book shows the Monkees' day-by-day career in detail, demonstrating how much work was involved, and the actual musical contributions all members had. Always glad to hear more Monkees recordings. Looks like this was 10/3 or 4/68.
26 July 2008 at 21:48