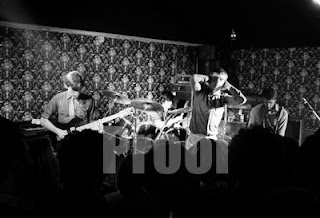 As collectors items go, I guess this really is 'A List' material.

With the passing of Anthony H. Wilson, founder of Factory Records, along with the film of the late Ian Curtis and Joy Division, (with the reissues of all Joy Division material), obtaining something alternative from the band may prove difficult.

That this boot is also a very real part of the post punk and new wave era at grass roots level adds to the attraction.

So why were Joy Division playing a gig at a youth club, to an audience of predominately 10 to 16 year olds?

They were bizarrely playing the youth club because Bob Jefferson, who was promoting the gigs at the venue on Wednesday nights, had bought them out of their first contract, so they could join Factory Records.

He owned Streets Ahead records in Altrincham. They played the gig as a thank you!

I do not know the kind person that cleaned up this sound board recording, however considerable work went into developing a digital version. Here are the notes that came with the recording.

"I've been meaning to clean this up for ages. The original had many, many little drop-outs and an imbalance between the channels. This was probably down to the deteriorating quality of the original tape or dirty tape heads. There were also about 200 digital clicks which have all
been manually removed. This allowed me to normalise the whole show, track by track to allow playback at fairly constant volume. You can now hear snare, hi-hats and symbols without the need for further digital enhancement. There is absolutely no noise/hiss reduction so there is still a slight hiss, predominantly on the right channel".

So in all their early glory here are Joy Division live at Bowdon Vale Social Club, Altrincham, England, on Wednesday 14th March 1979.

Sound quality: Improves after track one, unfortunately the final track is incomplete. It is an incredible gig!

I thought I would go with an actual photo from the gig apologies that it comes with 'proof' across it ( photo by Martin O'Neill).

zeroid said…
Wow, thanks for posting this, I love early Joy Division just as much as their later stuff so am looking forward to hearing this.
30 November 2007 at 10:54

HiFidiot said…
man, thats unbelieveable! I owe nearly anything of JD - i thought. But now i found this ... This is fantastic! Thanx a lot and a happy newyears day!
27 December 2007 at 22:01

Anonymous said…
I recall having seen the original post to which you refer, but can't find it now among my bookmarks, where I'd put it in hope to return to it and download this show. Thanks for posting it; otherwise I wouldn't have it. A live recording of "I remember nothing"? Yea, verily. Million thanks.
18 January 2008 at 01:43

Anonymous said…
Any chance of reposting this? Would greatly appreciate it.
23 February 2008 at 03:21

Anonymous said…
I was at this gig. Bowdon Vale wasn't a youth club - it was a Social Club and cost 25p to join -I still have my membership card but unfortunately not the ticket. I have one from the week before bought from Streets Ahead for Fast Cars on 7th March 1979.
Joy Division were amazing. Ian Curtis hypnotic.
The DJ was Ian Robinson and did it with his brother.
Adrian was some mad punk who pogo-ed wildly to Whiteman at Hammersmith Palais.
I'm Karen and was there with my sister Sonja, friends Lindy, Glenn and JJ. Let me know of you were to.

Anonymous said…
If Karen D can get in touch with Fast Cars at the.fastcars@ntlworld.com we would love a scan of your ticket !!
22 January 2009 at 17:28

Unknown said…
Thanks so, so very much.

It would be nice if there was a ranking on all the essential JD boots (quality-wise)... Links appreicated, of course, thanx
27 January 2009 at 01:25

Jan Molam said…
thanks so much for the new link! Its one of my favorite JD Gigs ever since I heard it on the "Death" Bootleg, glad that someone cared and made this cleaned up version!
13 September 2016 at 10:39