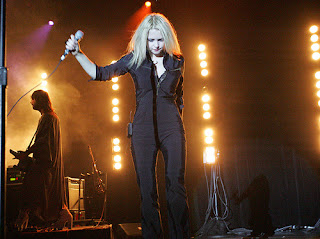 Goldfrapp have a new CD album release (Seventh Tree) due out here in the UK on the 25th February 2008.

I am an unashamed and somewhat 'gushing' fan of Goldfrapp.

No doubt (and based on the last three albums) I will buy the deluxe CD/DVD version of the album for my collection, regardless of the freebie mp3 versions that arrive.

Every album they have released, contains a healthy amount of 'new direction' whilst retaining the very essence of Goldfrapp, which is a unique style that skips across genres and keeps music cretins (sorry critics) on their feet.

From the fourth coming album here is the initial 'single' release:

Back in 2004 Goldfrapp played Glastonbury, and thankfully a reasonable part of their show was recorded for broadcast, on either MTV or the BBC who were both present at that years event.

This is one continuous segment of the performance (except for the first song which opened the show and is edited on).

The performance starts with Utopia, and ends with a sublime and quite sensitive version of Black Cherry.

What lies between I noted down and subsequently mislaid, so just enjoy the show as it was originally ripped, and discover for yourself the superb remainder.

This is a very good stereo recording.

Beehive Candy said…
COPY AND PASTE THE LINK IN YOUR WEB BROWSER TO GO TO THE MEDIAFIRE DOWNLOAD PAGE:

PROBLEM? LET THE BEEHIVE KNOW, AND WE WILL TRY AND FIX IT FOR YOU.

Anonymous said…
rock on perfecto.. quite like goldfrapp too, and alison, some of their tunes ooze u know wot, and are all the more powerful for it.. great performers, i imagine, given the right circumstances... thanks killer.............zenoz
23 January 2008 at 01:27