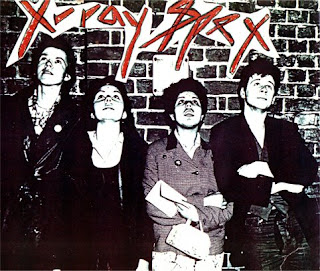 X-Ray Spex were one of the few female (Poly Styrene) fronted punk bands from that era and were summed up more recently by John Lydon as follows - "Them, they came out with a sound and attitude and a whole energy - it was just not relating to anything around it - superb."

Source: Possibly soundboard (levels and audience noise suggest this is the case).

Comments: They never took themselves to seriously, had enough ability and unique attributes to get noticed, and if there had of been a punk charter for the time they could have been the model - (a few singles, one album, perform live after just the one rehearsal, and have a point of view).

X-Ray Spex played a short residency at CBGB's from which I understand this was liberated. Amongst those who turned out to see them were members of Blondie and Richard Hell from the Voidoids. In true punk spirit they were there to play, no single or album to plug, just some energetic live nights on stage.

You can read a little more through the above links, and for those of us of a certain age take a little saunter down memory lane.