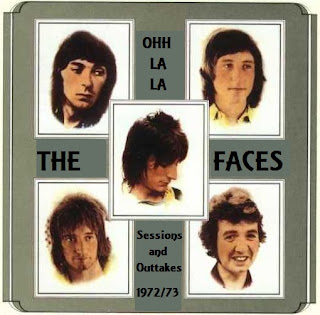 This is a small collection of studio session and rehearsal material from The Faces during the recording of Ohh La La at some point between September 1972 and January 1973.

There is always a story behind the recording of an album and in this case we are quoting wikipedia ( so excuse any errors) - With his career in the stratosphere due to successes from his solo albums, Rod Stewart  became increasingly distanced from his band mates, who were by the time of the album's recording little more than his backing group in concerts. As a result, according to Ian McLagan, Ooh La La was "Ronnie (Lane)'s  album", Stewart distracted enough to have missed the first fortnight's worth of sessions. The album's recording would be plagued by Stewart's absence. Nonetheless, producer Glyn Johns held the group together, helping to placate tensions as he had with the Beatles during their Get Back  sessions and helping the group to record a strong album in the style of its predecessor as opposed to the group's first two releases, which were self-produced and rather lengthy.

Shortly after the album's release, Stewart reported to New Musical Express that he felt that Ooh La La was a "stinking rotten album", later making things worse by telling Rolling Stone that what he had actually said was that the group was capable of "doing a better album than we've done". The rest of the group was understandably hurt by the comments. Ronnie Lane, especially hurt and not looking forward to being even more increasingly relegated to the sidelines, quit in June and was replaced shortly thereafter by former Free bassist Tetsu Yamauchi. The group recorded three subsequent singles, but never again recorded an album, disbanding in late 1975.

The recent reunion of The Faces with Ronnie Wood, Ian McLaglan and Kenney Jones being joined by Mick Hucknall and Glen Matlock, has surprisingly received some positive press in the UK. Mick Hucknall has apparently done a great job in replacing Rod Stewart. It will be intersting to see how this continues to develop.