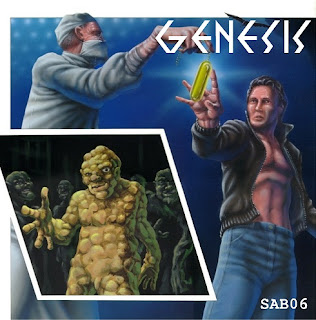 This is Genesis back on the 10th January 1975 in concert at the Convention Hall, West Palm Beach, Florida, USA.

There are hundreds of Genesis bootlegs in circulation spanning their history, this is from the Lamb Lies Down On Broadway tour, and is regarded as one of the best quality recordings from that tour, however there is a story behind this.

The concert has been circulated under different names and through differing CD sources including Descends on Waterbury, Supper's Ready With a Little Lost Lamb, Hogweed 5, Burp 09, SAB 06, Digital West Palm Beach. This copy is from SAB06.

The Genesis Movement site tells us, regarding the SAB06 version (Notes from Dan) - "Although I have a direct DAT clone of the Chris Davies tapes, I used a DAT clone from an unknown source which sounded a little bit better. I edited out as many 'artifacts' as I could find, but the 'reel squeals' are still there. The Shrine '75 recording was used to fill out the missing pieces of the show. The filler was 'enhanced' to make it sound as close as possible to the rest of the show. Obviously, this is not a 'pure' recording, but it is definitely an enjoyable 'Lamb' listening experience."

Another commenter stated - Definitely better that the others in terms of sound quality - I guess the listener will have to choose a "Pure" show with fillers from audience tapes, or a premium remaster like this that is in my opinion true to the actual concert. The way the necessary fillers are blended in on this remaster, makes this a great listening experience and because it deserves to stick out I give it an A+ rating. Fillers or no fillers, the sound quality on this is truly excellent.

From a personal point of view, when one considers the amount of 'enhancement' that can go into an officially released live album, the work on this bootleg is no different and possibly even less played around with, more a labour of love, it sounds superb.

The Lamb Lies Down on Broadway is a double concept album recorded and released in 1974. It was their sixth studio album and the last album by the group to feature the involvement of lead singer Peter Gabriel.

The album tells the surreal story of a Puerto Rican juvenile delinquent named Rael living in New York City, who is swept underground to face bizarre creatures and nightmarish dangers in order to rescue his brother John. Several of the story's occurrences and places were derived from Peter Gabriel's dreams, and the protagonist's name is a play on his surname. In an interview Phil Collins remarked, "It's about a 'split personality'.

Nico said…
Thanks Mike ! To me, the studio version is one of the essential 10 recordings of all time. I have a DVD downloaded from the genesis movement site you are referring in your post, which uses this audio as audio track, it is superb indeed. Thxs again !
Cheerz,
N
14 November 2010 at 01:31

Danika Holmes said…
Hello! I saw your downloaded a couple songs from my VPK! Hope you enjoyed! Please let me know if anything else is needed. Thanks!
16 November 2010 at 15:14

Anonymous said…
Please could you re-upload this amazing boot, it seems for the description above that this one is great, hope you can upload again this!
20 March 2012 at 07:35