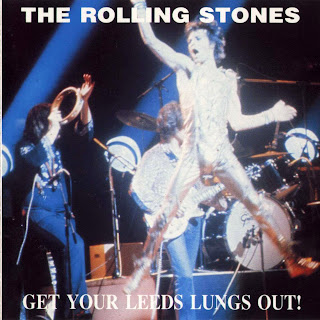 This is The Rolling Stones live at Leeds University, England back on the 13th March 1971. The concert was broadcast by the BBC and it is most likely missing a few songs from the full performance.

The concert was released as a bootleg under the title 'Get Your Leeds Lungs Out', and this version is from a CD released on The Swinging Pig boot label (TSP-CD-030) that surfaced in 1989.

Greg Prato from the All Music Guide had this to say about the remastered version of this recording - Get Your Leeds Lungs Out! is from the U.K. leg of the Sticky Fingers tour back in 1971. The Stones are inspired throughout, so the whole show is one big highlight, starting with the smooth country of "Dead Flowers." Also included is a fiercely swinging take of the Jagger-attitude testimony, "Bitch," a slower and more spacious "Satisfaction," and a version of "Brown Sugar" that is no less sleazy and lustful than the original. Keith Richards and Mick Taylor show why many Stones enthusiasts considered this lineup their best, as the duo spin and weave their guitar lines together and trade off solos with each other throughout the show.

Also included are sidemen Bobby Keys (saxophone), Jim Price (trumpet), and Nicky Hopkins (piano), who help augment the compositions. "Let It Rock" is a forgotten Stones cover of a Chuck Berry song (it was only issued as a B-side to "Brown Sugar" and has never been included on any of their compilations) that turns out to be a good old rowdy rave-up. The problem with Get Your Leeds Lungs Out! is that it contains a total of six songs that were issued (in quite similar versions) on the official live album Get Yer Ya-Ya's Out just two years prior.

If the overly produced and studio-enhanced Get Yer Ya-Ya's Out leaves you feeling a bit cold, hunt down a copy of the rough and rocking Get Your Leeds Lungs Out! - Revisited to cure your blues.