Background : Lefse Records is excited to announce the addition of the Fair Ohs to the their roster. Eddy Frankel (guitar/vocals), Matt Flag (bass) and Joey Ryan (drums) started two years ago in East London as a raucous hardcore band called Big F***ing Deal, but have since settled on Fair Ohs after numerous changes. Everything Is Dancing  is their debut full length, but have had split record/cassettes with Male Bonding, Women, Cold Pumas, Spectrals on a host of rad UK DIY labels like Sex Is Disgusting and Faux Discx. Everything is Dancing is influenced by West African funk, 60's Psycheldic Rock, Eritrean Guayla music and a whole heap of Fleetwood Mac. The record is being released in all formats on Lefse July 26th, and July 7th on the bands own Honey High Records in the UK. 2011Candy Says : Reminds me of early new wave in some ways, take that as a positive, nice upbeat and lively, just right for a summers day. Listen: Eden Rock . Web: Official . ______________________________
Post a Comment
Read more 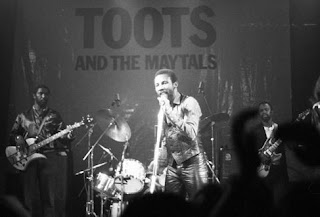 This is Toots and The Maytals live in New York back in 1979. This would have been the latter part of their set on the night, as at this time they would normally play around a dozen songs and usually include a few hits such as Monkey Man, Pressure Drop and the like. There is some dispute as to the venue, The Bottom Line Club has been cited elsewhere however there is no record of them performing at the club that year in the archives, however WNEW would regularly cover live performances at that time from the venue. Any how despite the lack of facts this is one fine recording to enjoy. Toots and the Maytals' compositions would be given a second airing in 1978-80 during the reggae punk and ska revival period in the UK, when The Specials included "Monkey Man" on their 1979 debut album and The Clash covered "Pressure Drop". They were also included in the lyrics to Bob Marley & The Wailers song, "Punky Reggae Party" - "The Wailers will be there,
1 comment
Read more
More posts