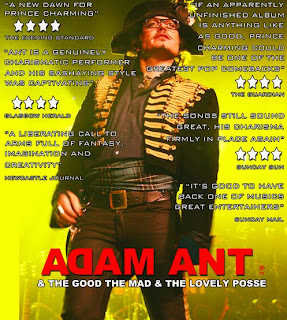 This is Adam Ant live at the intimate and wonderful venue Mr Kyps, Poole, Dorset, England recorded last year on the 20th June 2011. Mr Kyps is a popular venue for tribute bands, however there have been a good number of bands and artists who have 'cut their teeth' at venues like this and gone on to greater glories, and acts such as Adam Ant who enjoy the interaction with a close up audience.

Since 2010, Adam Ant has undertaken a major reactivation of his musical career, performing live regularly in his hometown London and beyond, recording a new album and with two full-length UK national tours now completed.

Wikipedia tells us regarding the small tour that includes this concert - Similar acclaim was given to the five date Seaside Tour of coastal resorts in the south of England which Ant undertook on 17–22 June 2011. Local Cornish radio station The Source FM cheered the 18 June 2011 Falmouth concert on its website: "The audience goes wild. Adam stalks the stage, in control, he already knows he's got us ... he plays songs that a man in his mid fifties shouldn’t really get away with, but he does, with dignity. Here's a man who still has something to say and manages to say it with 30 year old songs...Someone boos, Adam retaliates and we're with him. There’s nothing to boo here... Did that really just happen? Did Adam Ant really just blow us all away with the best gig of the year so far? I think he did." The Seaside Tour served both as a follow-up to the main UK tour and a warm-up to Ant's appearance at Hard Rock Calling 2011 in Hyde Park on 26 June 2011, third on the bill to Rod Stewart and Stevie Nicks before an audience of 45,000. The festival's official website lauded his performance, reporting that "Adam Ant returned to London in tip-top shape this afternoon on the Main Stage in Hyde Park ...he left the stage to rapturous applause and cheers, leaving no question as to who was the real Prince Charming this weekend."