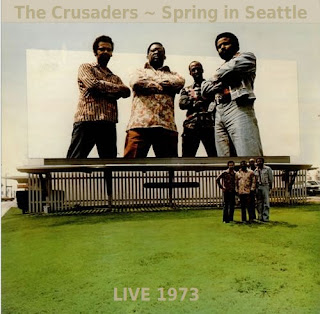 This is The Crusaders , live in concert at the Hec Edmundson Pavillion, Seattle, WA, USA, sometime in the springtime of 1973. I have read elsewhere that this is one of the finest unofficial and unreleased live recordings of the band, whether that is true or not, this is simply put, astounding music and musicianship! Their crossover from Jazz to include a mixture of funk and soulful sounds made their music accessible to a huge audience as this gig demonstrates. Some further background leading to this part of the bands long history from wikipedia - In 1960, following the demise of a few short-lived Houston-based groups called The Swingsters and the Nite Hawks, pianist Joe Sample, drummer Stix Hooper, saxophonist Wilton Felder and trombonist Wayne Henderson relocated to Los Angeles, CA. After changing their name to "The Jazz Crusaders," the group signed with Pacific Jazz Records, where they would remain throughout the 1960s. Employing a two-manned front-line horn section (
2 comments
Read more
More posts