Showing posts from September 9, 2012
Show All 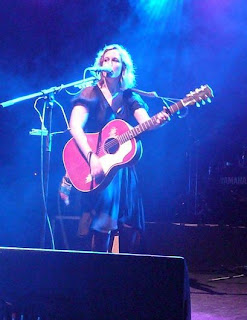 This is Tift Merritt live at WFMU on the Shrunken Planets programme originally broadcast on May 26th 2012. The engineer for this session was Stu Rutherford and the performance was recorded May 12th 2012. One point of interest was the song After Today, Tift hadn't planned on playing the song for this session, but added it on the spur of the moment.  Tift Merritt began her professional career with her band The Carbines playing small clubs in Chapel Hill and Raleigh such as The Cave, Cat's Cradle, and the front porch of the General Store in Bynum, NC. In 1998, The Carbines released a 7-inch single "Jukejoint Girl" b/w "Cowboy". In 1999, Merritt made a guest appearance on a seven-song EP on the by Yep Roc label with the Two Dollar Pistols, led by John Howie, Jr. The record was called The Two Dollar Pistols with Tift Merritt. The EP featured two original tunes and five cover songs. In 2000, she won MerleFest's Chris Austin Songwriting Contest, found a mana
2 comments
Read more
More posts