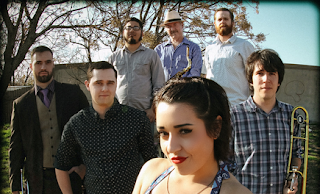 Steady Legend - Background - Steady Legend is the brainchild of multi-instrumentalist Michael Mancuso. Originally from North Carolina, Mancuso spent his high school years a trombone player touring around the Southeast with various acts. After high school, he attended the University of North Carolina at Asheville, NC studying music, where he picked up bass, guitar, drums, and keys while attending frequent jam sessions in the musical hotbed tucked away in the Blue Ridge Mountains. After graduation, he moved to Austin to create a band that could handle a menagerie of different styles and blend it together into a fun, dance-friendly show. In Spring 2011, he met singer Debora Otero through a chance Craigslist ad and the band was formed.

Releasing their heavy hitting self-titled debut album in March 2015, the record takes listeners on a journey though melodic horn features, chant choruses, epic guitar solos, catchy vocal riffs, and everything in between. From the upbeat soul sound of “No Troubles” to the mysterious reggae vibes of “Mirrors” to the the catchy swing/ska finale of “The Best For Last”, one thing is certain - the future is bright for this young group.

Although their debut album came out in March, I didn't wan't to miss out on featuring this fine band. Sometimes upbeat Ska just hits the spot as does the song below, from a quality album, that I feel is worth another plug along the way. Website Here. 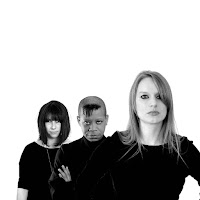 BLiNDNESS - Background - Formed in 2008, Blindness features Beth Rettig (vocals, programming, noise), Emma Quick (bass, noise), and Debbie Smith (guitar, feedback,noise), the latter being guitarist for 90’s bands Curve and Echobelly and, later, Snowpony.
Taking sonic tips from The Jesus and Mary Chain as well as My Bloody Valentine and with the hook sensibility of PJ Harvey.

Blindness are a band with a machine gun etiquette, showing "exquisite warmth" in their "seductive dark wave electro pop." The songs on their forthcoming debut album ‘Wrapped In Plastic" on Saint Marie Records will take you on an adrenaline fuelled, rollercoaster ride of beautiful chaos.

The album is due out on July 24th and the above is a fair reflection from a band who drift around the shoegaze genre, dipping into other places and confronting the listener with a power house of sounds. Fans of the name dropped artists above, really should give this band a careful listen. 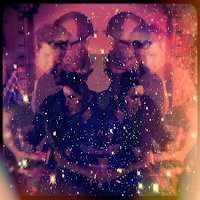 The songs are evocative both musically and lyrically, touching on metaphysical, existential and interpersonal subject matter with an honesty that resonates to an emotional core. Their music is a reflection of the triumph and tragedy of the world, compelling us to look deeper into the realms of our consciousness. Malka is trying to stretch the concept of songs to make them sound more like emotional lapses of time. The vocal melodies assume an instrumental form and transcend language, adding transparency to bilingual Spanish-English lyrics shared between three lead vocalists.

OK if you have read the above and are still trying to work out just how this band might sound, take a listen to the featured track and then anticipate that they do a lot more besides and you will be pretty near to the genre spanning sounds Malka produce. Website Here.

Oh Geronimo - Background - Not too long ago, my basement bedroom flooded as a result of heavy rainfall and snow melt. This happened twice during the transitional turmoil between Ontario's sombre winter and damp spring. It had a much more tragic and lasting effect than I anticipated, since many sentimental items were slowly destroyed by mould. We wrote these songs about it.

As a child, it can be easy to immerse yourself in a moment. As an adult, regret and anxiety and stress get in the way. My friends and I have a project that provides an escape from the daily rigours of modern life. Together we craft songs about the experiences that have defined our lives. In order to fully express ourselves, we ignore all of the distractions, and free fall into the moment. Oh Geronimo.
We all need an escape.

A song that tells a story about an event that caused distress and yet somehow bounces along in a cheerful way. It should not work, but does, and the second song demonstrates greater depth (oops) from a band to keep an ear or eye out for.