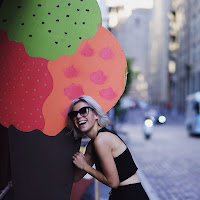 Bio - The duo is the collaborative project of Stanford brainiacs Lilly Wolf and producer Alex Neuhausen, better known as Dr. Nu (who derives his pseudonym from his doctorate in electrical engineering).

While the duo consists of these two equal partners, Wolfson’s name and face represent them. While studying at Stanford University, Wolfson and Neuhausen met on line in a musician-based Facebook group. At the time, Wolfson had a singer/songwriter focus and recruited Neuhausen to play the guitar. Having won several singing competitions and performed on “A Prairie Home Companion,” Wolfson was pursuing a more acoustic sound.

However, after a few years of performing music in the Bay Area, the two transitioned their style and entered the EDM arena, employing synths, elements of house and dubstep, and their own electro flavourings to craft an entirely different sound. Lilly Wolf has made a name for themselves with their high-energy sets that have earned them quite the dedicated following in the Brooklyn underground dance-pop community.

This is an enjoyable indie pop song with superb vocals over synths, and a stylish production. Well produced music that deserves wider notice. 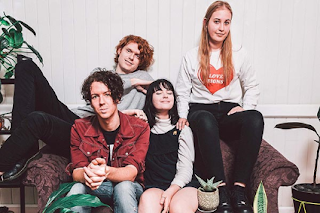 Background - In 2014 Babaganouj garnered serious radio attention with their releases “Too Late For Love” and “Bluff” - leading them to tour nationally twice, play each leg of The Blurst of Times tour as well as support a slew of notable acts such as The Preatures, Smudge, Veruca Salt, The Lemonheads, Northeast Party House and The Creases.

They have come into 2015 swingin' - having played The inaugural Palms invitational “Mates” Festival in Sydney, and supporting Atlanta girl-punks The Coathangers in Brisbane and Byron Bay. On top of that this year Babaganouj released their single “Can’t Stop”, toured the east coast of Australia with bands such as Hoodoo Gurus, Bearhug and Scotdrakula and were finalists for the Billy Thorpe scholarship at the Qmusic awards.

‘Hit Song’ is taken from the forthcoming album by Babaganouj, out in November.

Straight down the line rock with tons of energy and passion, leaning towards indie vocals and music. This is a no nonsense song and one that makes the November album, one to look forward to.