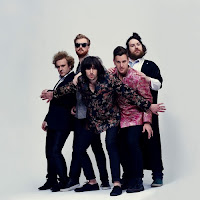 Having just returned from a hugely successful tour of Japan, where they signed with P-Vine records, this is the band’s first release since their world wide smash Zinedine Zidane in 2014. Vaudeville Smash has explored many genres but with Richter Scale and B-side Dangerous they revisit their first true love. Funk.

The single is out now and had worldwide radio premieres in Australia (on Triple R), in Japan (on Tokyo Inter FM) and in the US by on line heavyweight EDM Sauce.

"With Richter Scale, we channelled some of the great 80s boogie bands like Cameo and Midnight Star. We've set out to make a really great Funk album. It's our first love!" - Marc, Vaudeville Smash.

Synth drive funk, can't disagree with any of their words above. Actually the synth element lightens the sound up, giving it a fresher modern feel, without losing the intention to celebrate their funk forerunners. It's fun and it's catchy. 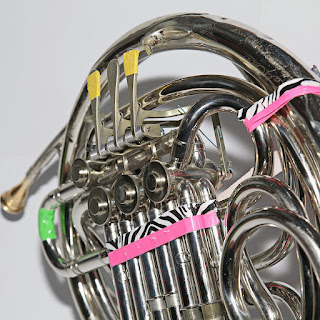 Background - The Brooklyn-based brother duo French Horn Rebellion have teamed up with singer-songwriter and trumpeter Spencer Ludwig (Capital Cities, RAC) for a blissfully optimistic bop called “Play Your Part,” which is the second single to come off FHR’s forthcoming Foolin’ Around EP (out November 6).

French Horn Rebellion are Robert and David Perlick-Molinari, two brothers born and bred in Milwaukee, Wisconsin, currently residing in Brooklyn, NY. In 2007, younger brother Robert was playing French horn in the Chicago Civic Orchestra, and decided to make hot beats instead. After telling the conductor that Mahler isn’t fun anymore he asked his bassoon-toting brother, David to join with him. And so it was, a French Horn Rebellion began.

Since then, the boys have travelled 5 continents with French horn slung over their back, doing shows with MGMT, Yelle, Cut Copy, and others along the way. Also, they've pioneered a new genre called 'Next Jack Swing,' like New Jack, but with heavy beats and funkier bass lines.

The track just blasts into action, with French horns blazing the trail. Spencer Ludwig has just the right voice, and the song has a mixture of charm, style (lots of style) and uplifting good time vibes.

Background - Since her early teenage years, Ducky has been fully immersed in club culture. She worked the door and started off her DJ career in San Francisco with the help of a fake ID before dropping out of high school at 17 and heading to NYU where she continued working on music. Following a move to LA this year and a release through Parisian imprint B.yrslf Division Ducky continues to shape her sound with a new EP on Nest. The three-track Lost Angeles is a scenic stroll through winding four-four environments, opening with the hazy title track, followed by the hypnotic "Rain Dance", and ending at "Winter Song" just as the Fall storm clouds land in LA.

This is a really good sounding and quite diverse EP. The featured track has a dreamy distant sound, that soothes. 'Rain Dance' is far more dance orientated and 'Winter Song' has a more stripped down, rhythm heavy feel and beat. All of which showcases Ducky in a very positive musical light.