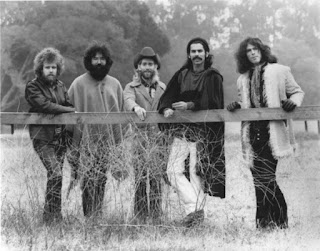 From the Internet Archive (IA) this is the New Riders Of The Purple Sage live at the Fillmore East, New York, USA back on the 28th April 1971.

Back in 2009 we featured the band live at the Fillmore West from the same tour, (that feature has now been updated with Internet Archive streaming and download links). The Fillmore East gig is such an excellent performance and recording, that I just could not resist featuring this to. The background for the band below is the same as, that we provided with the 2009 feature.

The group emerged from the psychedelic rock scene in San Francisco in 1969, and its original lineup included members of the Grateful Dead.

After a few warm up gigs throughout the Bay Area in 1969, the New Riders (for all intents and purposes John Dawson and David Nelson) began to tour in May 1970 as opening act with the Grateful Dead. This relationship continued on a regular basis until December 1971. Throughout much of 1970, the Dead would open with an acoustic set that often included John Dawson and David Nelson before segueing into the New Riders and then the electric Dead.

By the time the New Riders recorded their first album in late 1970, change was in the air. Dave Torbert, a young Bay Area musician, replaced Phil Lesh. After Mickey Hart went on sabbatical from music in early 1971, Spencer Dryden (from Jefferson Airplane) began a ten-year relationship with the group as their drummer, and eventually manager. The first album, eponymously titled, was released on Columbia Records in late 1971 and was a moderate success. Featuring all John Dawson songs, the record was driven by Jerry Garcia's inventive pedal-steel playing.

With the New Riders desiring to become more of a self-sufficient group and Jerry Garcia needing to focus on his other responsibilities, the musician parted ways with the group in November 1971. Sadly John 'Marmaduke' Dawson passed away in July 2009.

Comments: You can stream the concert below. For download files in either MP3 or OGG VORBIS format, visit the Internet Archive (here).


New Riders Of The Purple Sage