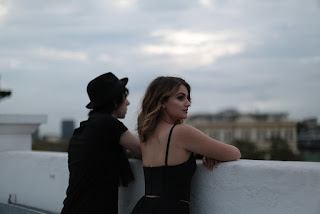 Background promo - Hailing from Sydney, Mary and Chris are Polarheart. The duo began writing together in early 2013. They found a strong chemistry, and a year later Polarheart was born.

Their combination of dreamy vocals and abstract soundscapes, makes for a captivating listening experience. After four successful singles and months of writing and recording, the Sydney duo are set to release their much anticipated self-titled debut EP in mid-2016.

The success of their previous single, “Dystopia”, launched them into the speakers of a captive international audience, it has hit over 1M plays on MrSuicideSheep. They took their songs to the stage, filling venues with a successful tour of Australia’s East Coast in October 2015. The previous songs have all received multiple spins on triple j, and radio play throughout the US, UK, and the Netherlands and 280k plays on Spotify. You’ll be able to catch Polarheart’s music on the upcoming Cameron Crowe and J.J. Abrams produced TV-series Roadies, airing this June on HBO.

Now comes “Enigma”, the latest offering from Polarheart. The track greets the audience with an new intimacy; fresh territory for the listeners of the electro-pop duo to explore. Buzzing synths, mammoth drums and a sparse piano characterise the vast scope of this single. This track owns the latest hours of the night, the last moments of wandering before the morning.

“We wrote this about that moment when you’re trying to move on from someone, but you can’t, because you realise you never fully knew them. They were always holding back a part of themselves, and its that wondering, its that knowing you couldn’t quite solve the puzzle that keeps you fixated on them.“ - Polarheart.

We featured Polarheart back in June last year and were impressed along with plenty of other people. 'Enigma' continues the story with the quality of their electro pop going from strength to strength. As the promo rightly states there is a more intimate feel to the song, however the band still create an expansive room filling sound. 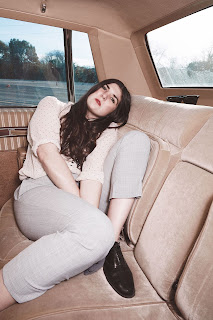 Background promo - Following a long stint in the role of harmony singer for several bands in Charleston, South Carolina, Grace Joyner made the decision to move to center stage with the release of her EP Young Fools in the Spring of 2014. Grace Joyner on her EP – “Young Fools serves to reflect on a difficult, yet incredibly important time in my life.  I think there is something valuable in admitting your mistakes, as well as recognizing the power within you to leave them behind.

Somewhere in the middle of learning that getting hurt does not make you weak, I started the healing process – I started writing music.”Where Young Fools served as Joyner’s introduction to songwriting, a chance to explore her musical muse and tread her own artistic path, her debut LP, Maybe Sometimes in C is here to reveal what she has found along the way. Teaming up again with producer and engineer, Wolfgang Zimmerman, Joyner uses Maybe Sometimes in C to further define her musical perspective and showcase her maturation as a songwriter. Addressing unrequited love, meeting yourself in a moment of failure, and most notably the importance of taking action, Maybe Sometimes in C reflects on moving on from the time of heartbreak and into a place of independence and self-assurance.

'Real' is the first single from Grace Joyner's new upcoming album, 'Maybe Sometimes in C (slated for release on Friday, May 20th, on Charleston-based label Hearts & Plugs). The album comprises of nine classy indie pop songs, some gentle and delicate pieces along with more pacey uplifting songs. As a collection, there is not one passenger, these are all fine songs that hopefully get heard far and wide.

The Velveteins - Hanging From The Ceiling.

Background words - Canadian psych-rock outfit The Velveteins have a new single 'Hanging From The Ceiling'. The track is off the reworked EP 'A Hot Second With The Velveteins' which was produced by Lincoln Parish (Cage The Elephant), soon to be released by Fierce Panda Canada (on May 27th!)

The band tell us - Hanging was one of the first songs we wrote collaboratively. Spencer was working with this cool 3/4 groove when I heard the sideways breakdown section. We ended up with this sort of psychedelic doo-wop number about things turning upside down. We've been working on our debut album and we hope to have that out by late this year. We're hitting the road with an extensive run in North America and the UK.

'Hanging From The Ceiling' is the new single and one of six delicious songs on the EP. The bands description of the song as a "psychedelic doo-wop number" is pretty much spot on. This is a classic case of if you like the song, you'll love the EP!