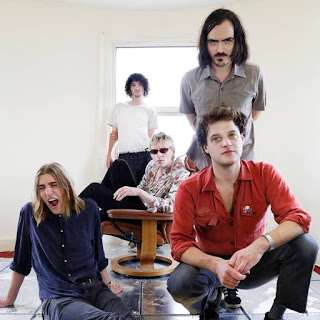 The fast rising band will be heading out on tour supporting Telegram between October 27 - November 3 where they will continue to offer their growing reputation and dedicated fans the sort of sleazy glam rhythms the band are becoming synonymous with, meshed with a pantheon of sounds from an eerie yet somewhat cheery afterlife.

The stunning B-side of the single is entitled ‘Free The Naked Rambler’ which has also gained 6 music airplay and is also the last track guitarist George Russell ever recorded with the band before his sudden and tragic death earlier this year. Both tracks will feature on their debut album released next year. Facebook here. 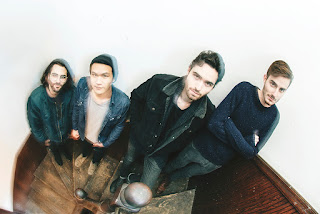 Background - Boston based four-piece Oh Malô (oh muh-low) are set to release video for enchanting single 'Miss You' taken from the band's stunning debut album 'As We Were' ahead of their upcoming east coast tour.

The quartet presents a shape-shifting sound through their dynamic arrangements as delicate vocals intertwine with ambient guitars and powerful, aggressive drums. They combine influences from rhythmically innovative indie outfits such as Bombay Bicycle Club and Local Natives, vocalists Patrick Watson and the late Jeff Buckley, and the chilling ambiance of Radiohead and Sigur Rós to create an unpredictable blend of timbres.

Singer/guitarist Brandon Hafetz explains the single as follows: "Miss You" was written during a very reflective period for me, the calm after the storm if you will. The song has a way of fooling your years into thinking you're listening to a happy and uplifting song though if you dig deeper past the musical front it still circles back to the themes of yearning and nostalgia that are present on our debut album 'As We Were'.

Over the past year, Oh Malô was nominated for “New Artist of the Year” at the 2015 Boston Music Awards, recorded live sessions for KEXP and Sofar Sounds New York, made showcase appearances at both CMJ and CMW and supported  several nationally touring acts such as From Indian Lakes, The Lighthouse and the Whaler and Halfnoise. Website here.

'Miss You' is a beautiful and very melodic, totally catchy song. The band perform with ease, the vocals are pristine, with plenty of heart and soul, put all that together and we arrive with one extremely fine song. 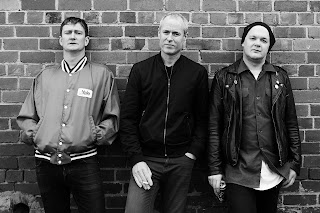 The Peep Tempel formed as a two-piece in late 2008 by songwriter and guitarist Blake Scott and drummer Steven Carter, who were neighbours at the time. The Peep Tempel recorded their self-titled debut studio album in 2011 as a three-piece with engineers Clinton Kraus and Anna Laverty at Sing Sing South recording studio in Melbourne. Longtime collaborator and engineer Matt Duffy played bass during the recording session. In late 2011 Stewart Rayner joined the band to play bass guitar and the band toured both in Australia and Europe as a three-piece during 2012. Their 2012 debut album received critical praise and was nominated in the category of Best Independent Hard Rock or Punk Album at the 2012 AIR Independent Music Awards.

The Peep Tempel have earned a reputation as one of Australia’s most powerful and respected live acts, their performances has been described as both energetic and scabrous in equal doses. Testament to the band’s live reputation, was their nomination for Best Band and Best Live Band at the 2015 The Age Music Victoria Awards. During the previous Australian summer The Peep Tempel wrote their third album in their West Melbourne studio and again collaborated with engineer Anna Laverty (Nick Cave & The Bad Seeds, Courtney Barnett), to record and mix the album at Sing Sing Studios. Facebook here.

The second of ten songs on 'Joy' the featured track 'Totality' is powerful and honest in it's own right, and typifies the sheer quality found across this album. Feisty throughout and mixing punk attitude with intriguing lyrics, set against a potent rock background, this is real rock'n'roll. 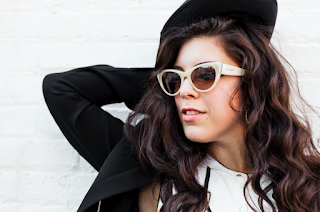 Surrounded by a family of performers, Kristina's interest in the arts and music began at young age. Her grandfather was a jazz singer and her aunt was an actress. Also pursuing the stage, Kristina holds a BFA in acting, and performed as company member with Chicago's Organic Theatre Company for 5 years before dedicating all of her time to music.

Honey & the 45s was awarded Best Blues/Jazz Band at the 2014 Chicago Independent Music Awards and has toured the Midwest and opened for such notable acts as Cold War Kids, Big Data, Smash Mouth, Andy Grammer, The Original Wailers and Eric Hutchinson. Kristina continues to play her favourite venues around Chicago and tour regionally with both Honey and KC Music. Website here.

Whilst three chord ukulele strummers in the audience at pop festivals should be rounded up and evicted (just my personal opinion) 'Ukulele Love Song' is an absolute delight and goes way beyond just the one instrument. Kristina's vocals are gorgeous, the melody equally and the video is also charming and fun. 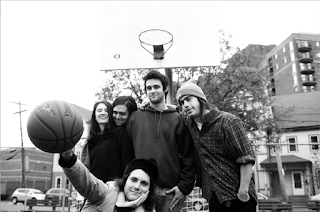 Background - Flower Girl have announced their upcoming album and shares the first track "Wading Online".  Their album 'Tuck In Your Tie-Dye' is due November 11 on BUFU Records. Like their namesake implies, Flower Girl is a celebration of youthful exuberance, tossing up sing-a-long anthems, and heady licks to decorate your path. Led by perennially grinning frontman Nick Morris, this NYC-based five-piece of hard-working chillers revels in an optimist high of contagious energy. With a sound that blends storytelling lyrics, catchy power pop hooks, understated alt-rock noodling, and a steady rhythm section grounded in a country backwoods feel, Flower Girl occupy a musical space all their own. Having accrued a hometown reputation for spreading smiles with raucous and revelatory live performances — featuring somersaults, whip cracks and lots of crowd dancing — these grown-up kids sure know how to start a party.

Buoyant and cheerful throughout, this colourful collection of sweet-hearted songs could warm the coals of a modern day scrooge with their impassioned appeals to have some just have some fun already. Akin to the vibes of Jonathan Richman and the be yourself spirit of 90’s Nickelodeon, Songs like "Let’s Build a Fort" drive that message home with cheeky refrains to escape the pretencion and pessimism of the city, pairing guitar licks, group calls and some well-placed cowbell. Likewise, the peppy pop of "Hi5’s" rejoices in the simple pleasure of slapping some skin and spreading the love.

You can almost hear the smile in Morris’ conversational croon. However, it's not all sunshine in Flower Girl’s world, as softer tracks like "Dorthy Says" and "2 Late 2 Be a Cowboy" feature a tinge of twangy country smoothness that betrays a quiet melancholy of missed opportunity, loneliness, and the dislocation of being a little guy in the big city. With most songs coming in under the 3 minute mark, these songs are compact and to the point. No breakout solos or meandering interludes distract from their overall message, just feel good vibes you won’t mind ricocheting around your skull like so many jumping jellybeans. So serve yourself a stack a flap jacks, pour on that sweet syrup and get ready to flip for Flower Girl. Facebook here.

'Wading Online' has feel good vibes through and through. The band sound loose and easy, which is just right for the vocals, and a song structure like this. Catchy, it's another really good tease, for a soon to be released album.