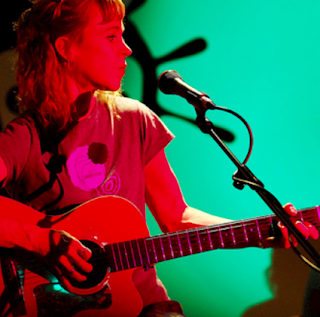 Background - Ahead of the North American release of her new ‘Wyatt at the Coyote Palace’ CD/book combo, Kristin Hersh presents her track ‘Bubble Net’.

“Just about everything is a wide open sea if you look closely enough or hover far enough over your landscape/soundscape, bruised and scraped… and when you feel trapped, you could try turning around and pushing at the edges, which turn out not to be solid after all,” explains Kristin Hersh. "I know nothing and songs know everything. Sad happens and sad isn't easy, but it's no less lovely for that. The refrain "there's no tomorrow" became a relief then: no need for fear. Maybe today is all we've got, but it's amazing."

‘Wyatt at the Coyote Palace’ is the third release in the ground-breaking book-CD format that Hersh began with her previous solo album “Crooked” and Throwing Muses’ 2013 release “Purgatory/Paradise”.  As part of her surprisingly successful career as an author, she has published the critically acclaimed “Paradoxical Undressing” in the UK (released as “Rat Girl” in the USA), a children’s book “Toby Snax,” and “Don’t Suck, Don’t Die,” a highly acclaimed personal account of her long friendship with the late Vic Chesnutt. Website here.

Following on from the impressive ‘Soma Gone Slapstick’, a song we featured at the end of September we can now share 'Bubble Net' another fine track from ‘Wyatt at the Coyote Palace’.  Bubble Net is the second of twenty four songs in this double album collection, where Kristin Hersh consistently delivers her refined, often understated and on occasionally raw sounding indie rock. There is no ego trip here, everything is about the music, the lyrics and the production, and there is plenty of warmth, intrigue and quality. For me this is a superb collection of natural, assessable and pleasing songs. 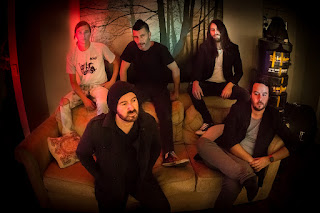 The Girl Folder - I'm Not Talking About Love Again.

Background - Nothing says summer like a harmony driven, catchy pop song and The Girl Folder’s latest release, ‘I’m Not Talking About Love Again’ is destined to become a favourite at BBQs, parties and the beach this summer. An epic, guitar driven pop song with synth lines from an 80s Korg Microkorg, and layers of vocal harmonies, ‘I’m Not Talking About Love Again’ is a live favourite at The Girl Folder’s gigs with a sing-a-long chorus of “I’m not talking about love again, because love blows my mind”.

“We love playing this live. It connects us to the audience more than any other track we have. There is always people singing along. Even if it’s the first time you have heard the song, it has that special quality of climbing into your mind and staying there. The term ear worm was made for this track!” says the band about the track.

The Girl Folder started with singer songwriter Matthew West relocating to Newcastle, NSW. Originally from London, Matthew gained extensive airplay on alternative London radio stations XFM (now Radio X) and Total Rock radio with his band Mobster, who also got the coveted ‘Single of the Week’ from Record Collector magazine. After relocating, he then proceeded to start an open mic night for two reasons: one, to showcase his songs, and two, to meet musicians.

A year later, The Girl Folder was born. Plundering time and space for musical meaning, The Girl Folder create original, lyrical and above all melodic songs: “Theres melody in everything we do. It’s the only rule, well unwritten rule that we have as a band. Anything goes as long as it works, but it has to be melodic.”

‘I’m Not Talking About Love Again’ was written, recorded produced and mixed by Matthew West and The Girl Folder at the bands studio, Sonic Mountain Studio in Newcastle, NSW. Written in 2015 and recorded June 2016, and will be released 11th of November 2016. Website here.

I love Australian promos this time of year, when they just have to mention summer, beaches, parties and BBQ's whilst half the world is slipping into winter and the cold, nothing like rubbing it in eh! So down under 'I'm Not Talking About Love Again' will be just right for all of that (it is indeed catchy and sing-a-long material). The rest of us can sit back and take in the darkness of the video, and wonder what kind of parties they actually have in Oz. 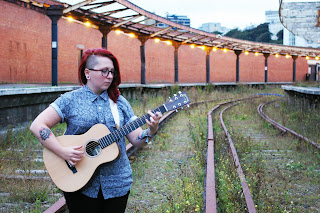 Finlay Leslie - Waiting On Your Goodbye.

Background - Fresh from supporting TV & solo star Heather Peace on her UK tour, Finlay Leslie showcases her captivating and honest vocals with emotive guitar playing that lashes more passionately than the tides against the iconic white cliffs of her hometown of Dover, in the addictive “Waiting On Your Goodbye”, released Friday 4th November.

Leslie brings the heart breaking new single “Waiting On Our Goodbye” with her emotions laid bare. The young singer/songwriter flaunts her poetic storytelling, creating an anthem for those times when the heart aches. Finlay combines reflective lyrics and moving vocals with upbeat guitar playing displaying songwriting talent exceeding far beyond her years.

Finlay Leslie makes up for what she lacks in height with a big voice and a markedly vast range of song writing inspiration. Drawing experience from break-ups, trust, love and revealing what she would say to her twelve-year-old self, this gifted self-taught storyteller already has a wealth of experience at her song-writing disposal.

Nineteen-year-old Finlay Leslie’s talents were discovered when quickly racking up an impressive 80,000 YouTube plays, providing an early indication of her raw songwriting abilities with distinctive versions and arrangements of well-known covers before posting incredibly well received live versions of her original compositions.

Following shows with the likes Radio 2 backed Blair Dunlop, Mishka Shubaly, Blackbeard’s Tea Party and TV & Solo star Heather Peace, Finlay has been chosen to support The Sons of Pitches, winners of BBC2 TV’s “The Naked Choir” at a selection of sold out shows. Festival appearances in 2016 include Tramlines, Harvest Festival, The Great Escape and “Heather Peace Presents” at Manchester Pride. “Waiting On Your Goodbye” is now released and taken from the debut album out next year. Facebook here.

We had the pleasure of featuring Finlay Leslie back in April this year and I am now delighted to share 'Waiting On Your Goodbye'. Another melodic acoustic song, where the vocals seemingly fly and skip above the energised guitar work, whilst the lyrics let the story unfold. It's creative and natural sounding manner, demonstrates quality and a real knack for songwriting and performing.